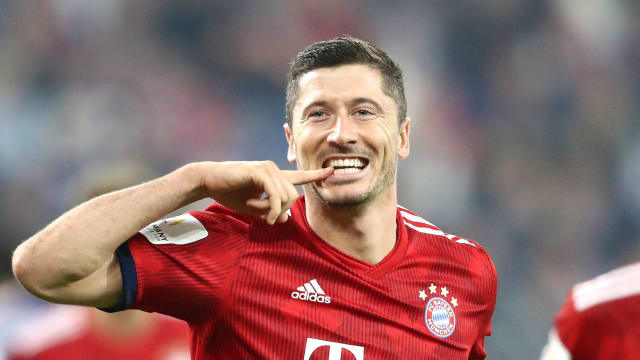 Robert Lewandowski will be restored to the Bayern Munich line-up for their clash with Hertha Berlin on Friday, Niko Kovac confirmed.

Lewandowski has scored three goals in four Bundesliga appearances this season but was dropped for Sandro Wagner in Tuesday's 1-1 draw with Augsburg.

The Bayern coach refused to be drawn into a discussion about Lewandowski's morale and defended his policy of prioritising the fitness of his top players amid a packed schedule of fixtures.

Following their trip to Berlin, the Bavarians face Ajax at home in the Champions League on Tuesday before entertaining Borussia Monchengladbach in the Bundesliga.

"The rotation of Lewandowski and Wagner was agreed. [On Friday], the starting line-up will look different again," said Kovac.

"We should not always discuss whether or not a player is angry. My job is to keep my players fit and fresh for the important games.

"I'll continue to rotate [versus Hertha], Ajax and Gladbach."

Kovac praised the performances in training of goalkeeper Sven Ulreich but said he has no plans to replace Manuel Neuer, despite the Germany international's recent error.

Neuer spilled a cross in the 86th minute versus Augsburg and Felix Gotze consequently equalised, ending the champions' 100 per cent record this season.

"Sven Ulreich is giving fantastic performances in training," Kovac said of the keeper who made 47 appearances in all competitions last term as Neuer recovered from a foot injury.

"But as long as Manuel Neuer is fit and playing well, there is no need to change anything in that position."

Bayern will be without Leon Goretzka due to an ankle injury when Kovac returns to the capital to face Hertha, for whom he made 223 appearances across two spells as a player.

"I still have relatives and friends in Berlin," said the 46-year-old. "There will definitely be some catching up to do after the game."