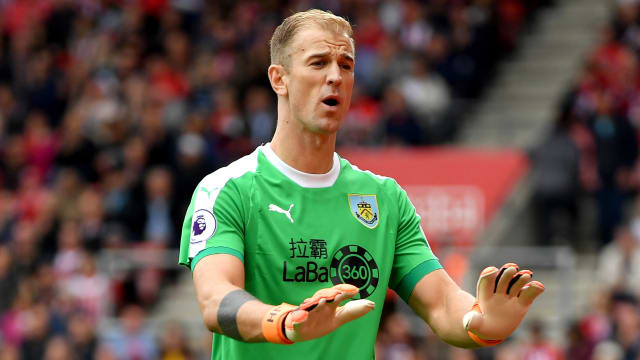 Burnley manager Sean Dyche believes Joe Hart is in the kind of form that would warrant a recall to the England squad.

Hart has endured a difficult last two years, culminating in not making his country's squad for their memorable World Cup campaign.

The 31-year-old, however, joined Burnley on a two-year deal in August and has started all six Premier League games for the Clarets so far this season.

Hart played an important role in his side's 4-0 win over Bournemouth on Saturday – their first league win of the campaign – in front of England boss Gareth Southgate and Dyche is confident that if called upon, he would not disappoint.

"I don't know [if he will get called up] but if that was to occur, I think he'd be ready, if needed," he said.

"I think Gareth is mostly trying to look to the future and the new players coming through.

Here we go again. The gaffer faces the media ahead of Tuesday night’s @Carabao_Cup trip to @burtonalbionfcpic.twitter.com/KpRCkMTt3M

"But he will also be well aware it is good to have experience around that group - that helps bring some of the younger players through.

"I trust Gareth to do whatever he has to do."

Dyche takes his side to Burton Albion in the EFL Cup on Tuesday, where Steven Defour will make his long-awaited comeback from knee surgery undertaken in February.

The game is likely to come too soon for another long-term absentee, Robbie Brady, but the Republic of Ireland international is edging closer to a comeback after sustaining a knee injury in December.

Brady – who played 82 minutes for the Under-23s on Monday – told the club's official website: "It's been a long number of months now but I'm feeling better as the weeks have gone on since I picked up that knock in pre-season.

"I feel really good so, please God, it's not much longer. I feel almost ready and I'm itching to get back."