Slater should be banned for Grand Final - Fittler 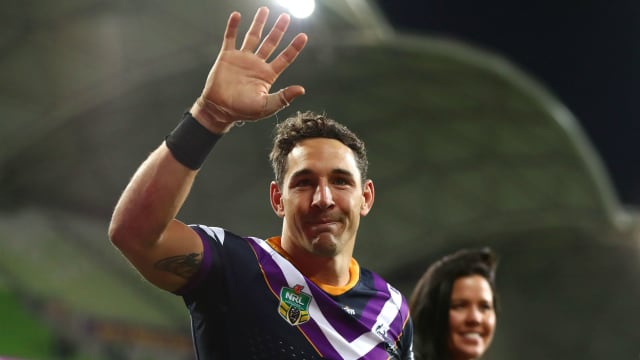 Brad Fittler believes Billy Slater should be banned for the NRL Grand Final as the Melbourne Storm full-back faces an anxious wait to discover whether he will be free to face Sydney Roosters.

The Storm superstar will face a three-man judiciary panel on Tuesday after he was charged with a grade-one shoulder charge for a try-saving hit on Sosaia Feki in a 22-6 Preliminary Final win over Cronulla Sharks on Friday.

Slater stated that there was no malice on his part when he knocked Feki into touch and Sharks coach Shane Flanagan was among those to say the retiring 35-year-old should be cleared to end his career with a Grand Final appearance.

He told The Footy Show on Channel 9: "We've seen a lot of shoulder charges over the last couple of years and it seems excessive for people to miss games - sometimes they're accidents and sometimes they're bracing and they've been suspended,

"The fact that it's Billy Slater and it's a Grand Final, you've gotta take that away from it.

"If you want to stop players doing it, you've gotta uphold what they've gone down with. Because if you're not going to take it out, all full-backs are going to come across saying 'now I can shoulder charge in this instance because Billy Slater got out of it.'

"Until someone gets hit in the head in that situation, then we're going to go and look back and do the whole thing again."

Fittler added: "The biggest thing in his favour is it's Billy, it's a Grand Final and he's actually going to sit in front of three people who need to say 'mate, you can't play next week,

"It would be very hard for them to say. But if you want to set an example and eradicate it out of the game, it's gotta stick."