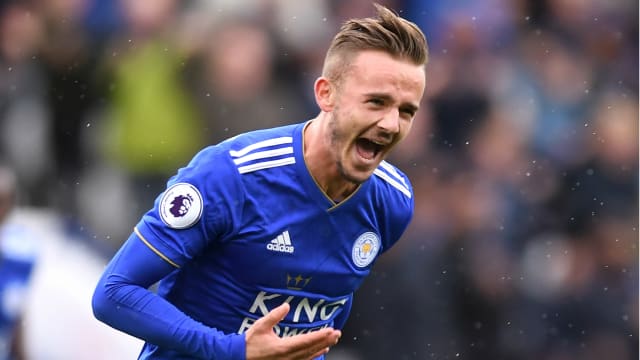 James Maddison scored an impressive free-kick as Leicester City came from behind to beat Huddersfield Town 3-1 in the Premier League, easing the pressure on boss Claude Puel.

Defender Mathias Jorgensen put Huddersfield in front after just five minutes, having failed to score in any of his 38 Premier League appearances last season.

But Kelechi Iheanacho, back in the team as one of three changes from Puel, promptly equalised before Maddison's moment of quality and Jamie Vardy's impressive finish proved decisive in the second half.

The home win gets Leicester back on track after a run of two straight defeats, while struggling Huddersfield remain without a victory.

Having found goals hard to come by this season, Huddersfield got just the start they needed. It was scrappy, but the visitors were delighted when Philip Billing's long throw was flicked on by Laurent Depoitre and tucked in by Jorgensen from six yards, Kasper Schmeichel unable to get enough behind the shot.

But their lead lasted only 14 minutes, as a lethal Leicester counter-attack produced the equaliser. An excellent Maddison throughball found Vardy, who teed up Iheanacho to place a first time, left-footed finish into the bottom corner from 18 yards.

Leicester made most of the running from there, as Vardy squandered good opportunities in either half and Harry Maguire was denied a penalty after tangling with Jorgensen.

Depoitre failed to pull the trigger quickly enough in a rare Huddersfield opening as he bore down on Schmeichel, but Maddison then produced a moment of quality at the other end to put Leicester ahead in the 66th minute, his curling, 25-yard free-kick proving too hot for Jonas Lossl to handle.

And the points were safe for Leicester with 15 minutes left, Vardy racing through to chip Lossl after Iheanacho sent him clear.

What it means: Leicester back on track as Huddersfield struggle

After back-to-back defeats against Liverpool and Bournemouth, Leicester and Puel looked like they were in trouble after falling behind, but a morale-boosting win in which their key attacking stars shone sets them up nicely for the weeks ahead.

Huddersfield came into the game winless and as the league's lowest scorers, and it could be another long, difficult season given they prop up the table with two points and only three goals from six games.

4 - James Maddison has either scored or assisted in four of his last five Premier League starts for Leicester City (3 goals, 1 assist). Whip. pic.twitter.com/w8VcE1fkTy

Maddison was excellent again for Leicester. His free-kick was the decisive moment with the match evenly poised at 1-1, while his earlier pass was instrumental in creating Leicester's equaliser. He now has three goals this season, while lively performances from Iheanacho and Vardy in attack also helped the Foxes, as a tinkering Puel continues to look for his best line-up.

Huddersfield will have fewer chances than the opposition in most of the games they play this season, so taking advantage of the openings they do create is pivotal. Depoitre, who replaced Steve Mounie for this game, did not do that, failing to shoot when through on goal in the second half, while also planting a late header straight at Schmeichel. Scoring goals looks like it is going to be a massive problem for Huddersfield again this year.

Leicester will aim to continue their momentum at Wolves in the EFL Cup on Tuesday before a crunch league meeting away to Newcastle United on Saturday, the same day as Huddersfield host Tottenham in the top flight.