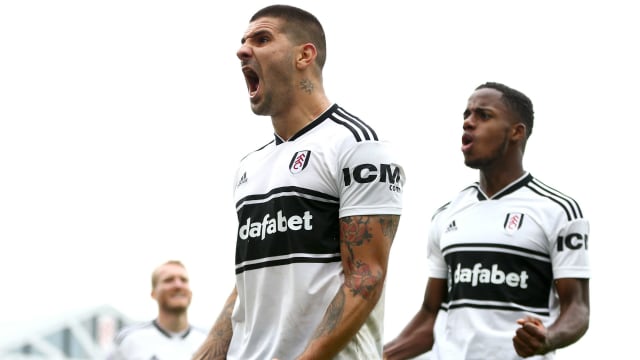 Aleksandar Mitrovic cancelled out Andre Gray's early opener as Fulham fought back to draw 1-1 with Watford in the Premier League on Saturday.

Having lost their 100 per cent record with defeat to Manchester United last time out, the visitors appeared to be on course to return to winning ways after Gray found the net just 87 seconds into the early kick-off.

Watford were unfortunate not to lead by more during a dominant first-half performance, with referee Martin Atkinson waving away strong shouts for a penalty after Alfie Mawson's ill-timed sliding challenge on Will Hughes.

However, Fulham improved after the break, their consistent pressure eventually rewarded when Mitrovic flicked home his fifth goal of the season from Luciano Vietto's low cross.

For the second time in as many games Fulham conceded inside two minutes, Hughes ending a brief spell of pinball on the edge of the home side's penalty area by teeing up Gray with a square pass.

The striker slotted the ball low beyond Marcus Bettinelli on that occasion but was unable to beat the goalkeeper when presented with another one-on-one opportunity later in the half set up by Mawson’s poorly judged header.

Fulham were also grateful to Ryan Sessegnon for inadvertently blocking Christian Kabasele’s on-target header when facing the wrong way, while Watford were also aggrieved by Atkinson's decision to merely book Timothy Fosu-Mensah for an awful tackle on Troy Deeney.

Slavisa Jokanovic - up against the club he led to promotion in 2015, only to leave before taking charge in the top flight - saw an improved display from Fulham in the second half, eventually leading to an equaliser.

The talismanic Mitrovic made no mistake from close range when picked out by Vietto but was denied a winner at the death, Ben Foster acrobatically tipping the Serbia striker’s header against the woodwork.