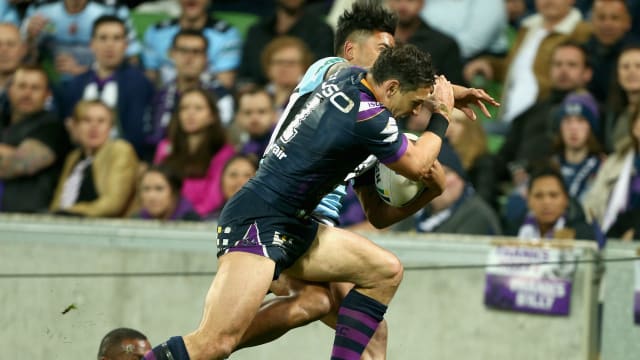 Billy Slater said there was no malice on his part in a collision with Cronulla Sharks winger Sosaia Feki that could cost the legendary full-back an NRL Grand Final swansong.

Slater knocked Feki into touch when the Sharks flyer was about to go over for a try in the first half of the Australia great's final match of his illustrious career at AAMI Park on Friday.

The outstanding 35-year-old scored two tries and laid on another for Brodie Croft in a 22-6 victory for the defending champions, but the Preliminary Final will be his last match if he is hit with a suspension.

Slater played down the incident and must now wait to discover whether he will be cleared to face either Sydney Roosters or South Sydney Rabbitohs at ANZ Stadium next Sunday.

"I was just coming across at speed and I actually thought Sosaia Feki was going to step back on the inside and it was just a collision in the end." he told Channel Nine in a post-match interview.

"It was just one of those things where both players were running at speed to get to a position and it would have been an awkward place to put my head if I had to duck it down.

"There was no malice or anything in that, I didn't think."

That's a double for @billyslater!#NRLStormSharks#NRLFinals#NRLpic.twitter.com/rBbVel3cNg

Sharks coach Shane Flanagan is in no doubt that Slater should be available to try and sign off in style in Sydney.

"I thought he had a hand in there actually. I had a quick look at it [after the match] and I thought he hit him with one shoulder and one hand, so what are you wanting him to do there? I'm not quite sure?" he said.

"For his team I think he needs to save a try there and I think he did his best."

Asked if he should play in the Grand Final, Flanagan added: "100 per cent, he should be there. He runs across, whether it was with his right or left arm he had in a push motion, so he will be there next week, or he should be."