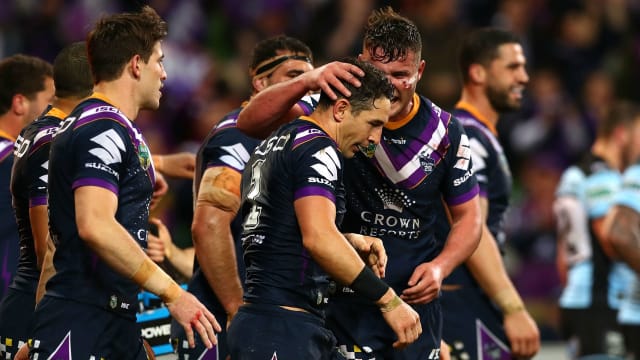 Billy Slater proved Melbourne Storm's inspiration as the defending NRL champions defeated Cronulla Sharks 22-6 to reach a third straight Grand Final, but the retiring full-back could yet be denied a chance to feature in the showpiece.

Slater, set to step away from the game after a glittering 15-year career, scored two tries and set up another on his last home appearance at AAMI Park as the Storm gained a measure of revenge after losing the 2016 final to the Sharks.

The talismanic full-back created the first four-pointer for Brodie Croft and then surged over for two himself as the hosts took a commanding 20-0 lead into half-time - an advantage they never looked likely to relinquish, even when Luke Lewis scored for Cronulla late on.

However, the Storm's three scores came after Slater was penalised for a shoulder charge on Sosaia Feki - a transgression that could jeopardise his place in next week's showpiece in Sydney.

Sydney Roosters and South Sydney Rabbitohs will battle it out on Saturday to join the Storm, but in the immediate aftermath of this win a crowd of 26,621 was wholly focused on offering the departing Slater a rousing send-off.

That same partisan following celebrated an early lead through Cameron Smith's penalty, before Slater was pinged for failing to use his arms as he desperately scampered across to deny Feki a try in the left corner.

Slater could potentially face further action if the NRL takes a dim view of the incident, but he was soon affecting the play at the other end by making a break and sending Croft over.

Croft returned the favour for Slater's first on the half hour before the Storm landed a hammer blow with the last action before the interval, Smith's superbly timed kick seized upon by the full-back.

Smith slotted his second penalty with 15 minutes to go and although Lewis, also retiring at the end of the season, got the Sharks on the board, the visitors were never in position to spoil Slater's big day.