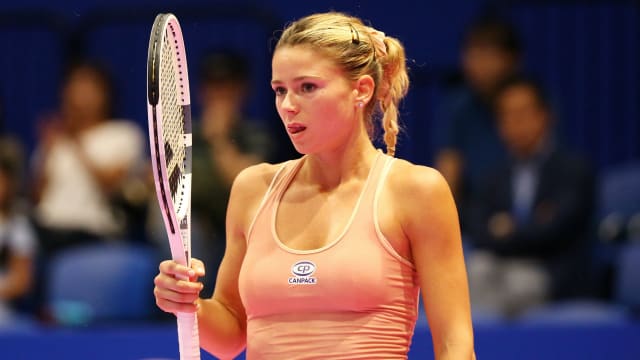 Camila Giorgi produced an inspired performance to end a struggling Caroline Wozniacki's dominance of the Tokyo Open and will face Victoria Azarenka in the quarter-finals.

Wozniacki won the tournament in each of the last two years, but the world number two's poor form continued as Giorgi marched into the last eight with a 6-2 2-6 6-4 victory.

The unseeded Giorgi had not beaten the Australian Open champion for four years, but the sprightly Italian outplayed the top seed with an outstanding display on Thursday.

Giorgi, ranked 37 in the world, was rewarded for an aggressive display, striking 16 winners in the first eight games as she dominated the first set.

Wozniacki turned the tide in the second after Giorgi failed to win five break points in the third game, but Giorgi continued to work the Dane from side to side and pounced on anything short as she came from 2-0 down in the decider to advance.

Giorgi had never beaten an opponent so high in the rankings, while a frustrated Wozniacki has now won only two of her last seven matches since taking the title at Eastbourne and has work to do to in the Race to Singapore.

What a win for Camila Giorgi!

Azarenka got the better of seventh seed Ashleigh Barty, coasting to a 6-4 6-2 win with two breaks in the first set and another three in the second.

Donna Vekic will take on Caroline Garcia following a 6-3 7-5 triumph over Johanna Konta, while Barbora Strycova saw off Anett Kontaveit and will now come up against newly-crowned US Open champion Naomi Osaka.