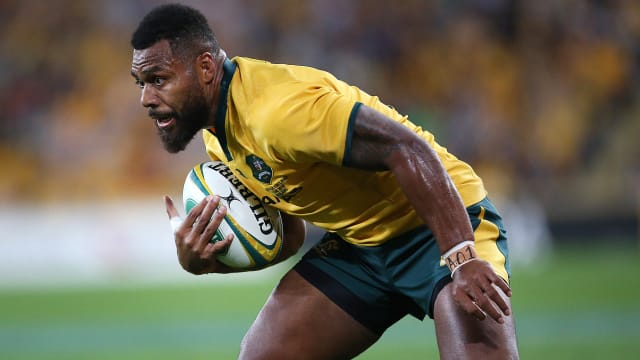 Wallabies and Reds centre Samu Kerevi recommitted to Rugby Australia (RA) and Queensland until the end of next year.

Kerevi, 24, has made 21 Test appearances for Australia, scoring five tries, since making his debut in 2016.

His re-signing was confirmed on Thursday, and Kerevi said the opportunity to potentially play at the 2019 Rugby World Cup was a key factor behind his deal.

"I'm excited to stay in Queensland for one more year, my family was a big factor in staying," said Kerevi, who is sidelined with a bicep injury.

"The young boys coming through the club is what keeps me at the Reds. I see the potential – not long ago I was in their shoes so to have one more year with them will be special.

"The World Cup is next year and that's pretty special for any rugby player. It's the biggest stage in world rugby and that was another driver for me.

"First thing is first and that's getting back to fitness and playing well for my club and hopefully being picked to represent Australia through the year and into the World Cup.

"Right now my goal is to hopefully make the back-end of the NRC, or even the Club Sevens Series but that all depends on how my rehab goes."