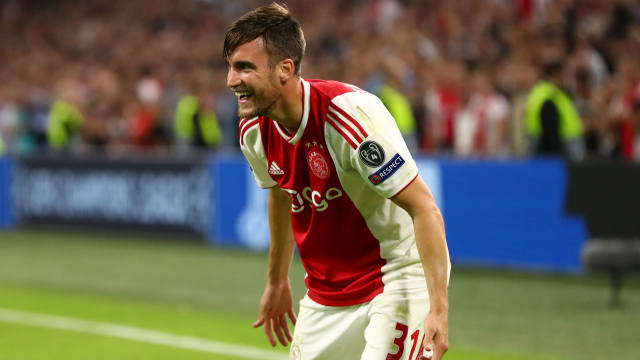 Nicolas Tagliafico was happy to follow Lionel Messi's lead in the Champions League after the defender struck twice for Ajax on Wednesday.

The Dutch club opened their campaign in Group E with a 3-0 home triumph over AEK Athens, though they were forced to wait for the breakthrough.

After a scoreless first half in Amsterdam, Tagliafico popped up with the opener less than a minute after the restart before adding a late third, albeit with a spectacular mishit that found the net.

The Argentinian could not quite match Messi's hat-trick for Barcelona against PSV the previous day, though he hoped his compatriot might have seen his unlikely scoring exploits.

"My first goal was the most important because it broke the match open. The second was, I admit, a little lucky," Tagliafico told UEFA.com.

"I know I almost scored as many as Messi did last night, though I don't know if he was watching.

"It was a difficult game, especially the first half, but that's what you expect in the Champions League.

"The coach told us during the break just to keep playing the way we were; he was happy with our first half."

"The timing of the first goal shouldn't serve as an excuse for our defeat," he told the media.

"What got to me most is the disappointment of my players who never really believed they could bounce back from that 1-0.

"We need to work on our mentality, we need to become more determined to respond. We lack experience, so it was a useful lesson for us."