Ajax 3 AEK Athens 0: Tagliafico at the double in opening win 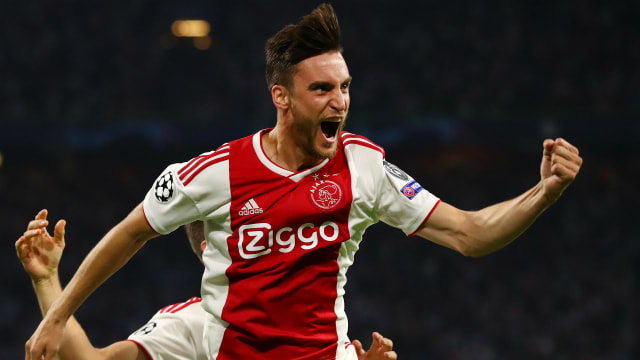 Nicolas Tagliafico was the unlikely hero as Ajax got their Champions League Group E campaign off to a winning start with a 3-0 victory over AEK Athens.

The Eredivisie side were stifled before the break by a resilient AEK outfit, who had the best chance of the first half through Andre Simoes.

But Erik ten Hag's men were quick out of the blocks after the interval, defender and highly infrequent goalscorer Tagliafico making the breakthrough 51 seconds into the half.

AEK could offer little in response and their spirits were broken when substitute Donny van de Beek volleyed in to double Ajax's lead, with Tagliafico then enjoying a huge slice of fortune when his off-balance strike flew into the net in stoppage time.

Ajax - without the injured Matthijs de Ligt - made a lively start in the first competitive meeting between the two sides since the 1994-95 edition of the tournament, Dusan Tadic's cross causing problems inside the first five minutes.

Greek champions AEK, back among Europe's elite after an absence of more than a decade, almost delivered the perfect sucker-punch, but the unmarked Simoes headed Petros Mantalos' free-kick wide.

The normal pattern of play resumed soon after, Hakim Ziyech taking aim from 20 yards, only to see his shot fly over the crossbar, while Tadic continued to threaten with his passing and vision.

Morocco international Ziyech did call Vasilios Barkas into action with his next attempt, but the goalkeeper was easily equal to a low, skidding effort.

AEK's Ezequiel Ponce was then thwarted by a timely defensive block at the end of a first half in which the hosts were largely frustrated.

That frustration evaporated within a minute of the restart, David Neres' delivery swept in by Tagliafico, who had a header brilliantly kept out by Barkas just before the hour mark.

An offside flag wiped out an excellent finish from Van de Beek, who had replaced the hugely disappointing Klaas-Jan Huntelaar, but Ajax had the result in the bag when the midfielder lashed home a second with 13 minutes remaining.

Tagliafico's spectacular mishit put the icing on the cake, his wry smile suggesting very strongly that good fortune, rather than skill, saw it fly into the top corner.


What does it mean: Ajax start climbing mountain AEK may not scale

With Bayern Munich the headline act in Group E, it seems likely the other three sides are playing for runner-up spot, and this was a fine first step in achieving that for Ajax. But for AEK, an already sizeable challenge just got even bigger.

Pat on the back: Tagliafico's night to remember

Ajax do possess goalscoring threats, but Tagliafico is not generally considered one of them. However, he netted twice – albeit the second via a slice of good luck – and forced a fine stop from Barkas to boot.

Boot up the backside: Huntelaar must show his Klaas

If Ajax are going to emerge from this group, they will need far better displays from seasoned striker Huntelaar, who was replaced in the 62nd minute after taking just 12 touches, none of which were attempts at goal. His replacement showed him the way.

Ajax head to Eredivisie champions PSV on Saturday with an eye on overhauling their rivals at the summit, while AEK will seek to build on a 100 per cent start to their league campaign with a trip to PAOK a day later.