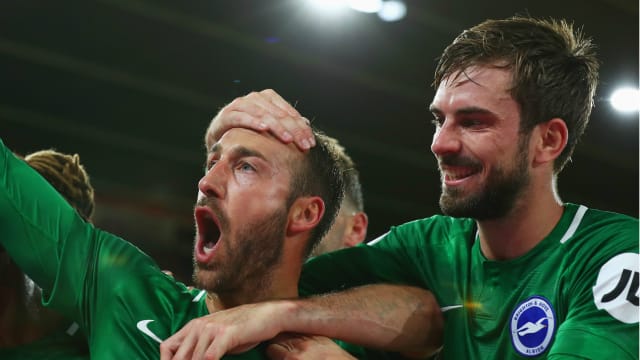 Chris Hughton praised the cool head of Glenn Murray after the Brighton and Hove Albion striker scored from the spot to earn a 2-2 draw at Southampton.

Brighton trailed 2-0 to a 35-yard stunner from Pierre-Emile Hojbjerg and a Danny Ings penalty before Shane Duffy's header cut the deficit.

And Murray, who struck a brace in a comeback draw at home against Fulham prior to the international break, tucked home from 12 yards in the 91st minute to secure Hughton's side a point.

"It's the second game we've come back from 2-0 down," Hughton said to Sky Sports.

"You have to look at the character but also some of the frailties that put us in that position in the first place - credit to the lads they responded well.

"If I'm looking at our preparation, they played the team we thought they would play. We needed to go after their centre-halves quicker and with more urgency and when we had possession we gave it up too readily and Southampton were by far better in the first period.

"We've had a reaction in the second half. We've had to react to conceding goals, certainly I'd prefer it the other way round where we take leads in games and hold on to those leads.

"At 2-1 down away from home and a penalty, you're not going to get a cooler head than Glenn Murray."

Murray has scored five times in six starts against the Saints and for the second game in a row he drew his side level from the penalty spot.

"After the way we performed in the first half we got away with one. We were very poor and were under par," Murray told Sky Sports.

"The second half was a different game. We put them under pressure and got our reward at the end.

"We were disappointed with the way we played and the gaffer let us know. We saw a difference in the second half.

"We were down at Fulham as well. It gave us heart and we felt if we get one the crowd might question the result. We got our chance in the last minute and managed to score it.

"It took us a while to believe last year and got our home form right. Now it is about putting the away form right and climbing the table more than we did last year."