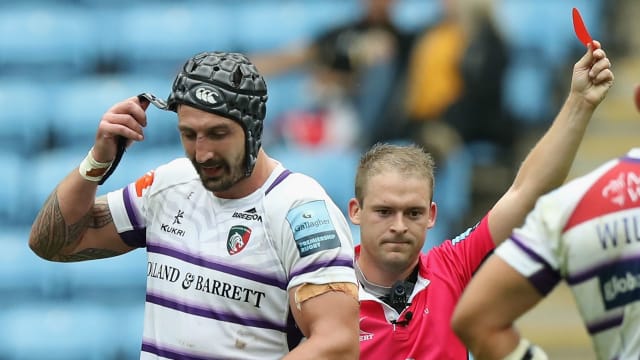 Will Spencer's controversial red card ultimately proved costly for Leicester Tigers, who went down 41-35 at Wasps in an all-time Premiership classic on Sunday.

Tigers lock Spencer was sent off for a high shot to the head of opposing hooker Tommy Taylor on the stroke of half-time in an eight-try epic at the Ricoh Arena.

Leicester head coach Geordan Murphy evidently disagreed with the decision of referee Ian Tempest, smiling wryly as Spencer left the field, while the call divided opinion among the rugby fraternity weighing into the debate via social media.

Despite starting the second half seven points and a man down, Leicester forged ahead only to run out of steam in the final 15 minutes as three penalties from New Zealand fly-half Lima Sopoaga, on his first start, handed Wasps a second win from three this season.

The tone for 80 minutes of scintillating attacking rugby was set inside 10 minutes when Wasps' Josh Bassett broke clear and the ball was eventually fed to Juan De Jongh to score, before Elliot Daly's perfect kick to the left corner found a leaping Bassett to double the advantage.

Back came Leicester, though, a George Ford grubber dotted down by Jonny May, only for Nathan Hughes to power over for Wasps' third. Two Ford penalties kept Leicester in touch, although Tigers prop Dan Cole was perhaps lucky to avoid a yellow for a late hit on Dan Robson.

Sopoaga split the posts with the subsequent penalty, but the final try of the half went Leicester's way as Telusa Veainu surged over.

Then came the contentious moment as Spencer caught Taylor high, Daly nailing his kick, but Leicester made light of their disadvantage early in the second period as Ford's penalty and Sione Kalamafoni's try either side of Hughes' sin-bin sanction had them in front for the first time.

De Jongh's sensational solo score and May's second meant the Tigers' lead remained at three – Ford striking the post with a chance to extend it – and Leicester had to content themselves with two losing bonus points as Sopoaga proved unerring from the tee.