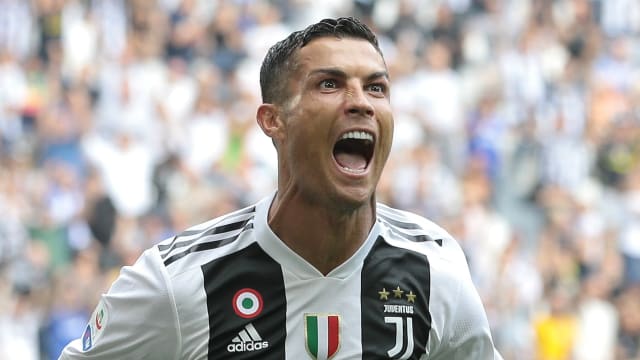 Cristiano Ronaldo opened his Juventus account with two second-half goals in the Serie A champions' 2-1 victory over Sassuolo, but substitute Douglas Costa's red card for spitting cast a shadow over the match.

Unspectacular though it may have been, the five-time Ballon d'Or winner's first goal delivered a palpable sense of relief around the Allianz Stadium, where the hosts had struggled to create chances against their in-form visitors.

His second smacked of a man settling into life in Turin, the former Real Madrid star coolly drilling the ball home after 65 minutes.

A memorable hat-trick seemed certain when a looping cross found Ronaldo unmarked at the far post, but the Portuguese side-footed his volley narrowly wide before missing another gilt-edged opportunity eight minutes from time, and events turned sour when Costa headbutted Federico Di Francesco in the build-up to Khouma Babacar's consolation and then spat in his face.

28 - Cristiano Ronaldo scored with his 28th attempt in Serie A, as in the last Spanish La Liga. Fortuity. #JuveSassuolo

It looked set to be a difficult afternoon for Ronaldo when he missed from just inside the box after six minutes and fluffed a header moments later, his frustration quietly matched by an increasingly underwhelmed home crowd.

Andrea Consigli ensured the game remained goalless at the break with a reaction save when Marlon Santos turned Joao Cancelo's cross towards his own net, the goalkeeper doing well to palm the ball away.

The second half was five minutes old when Gianmarco Ferrari attempted to head the ball out for a corner, but instead hit his own post and Ronaldo was on hand to poke the ball over the line from a yard out.

With 25 minutes left to play, Emre Can's pass found Ronaldo in space on the left and he strode confidently into the box before rattling the ball beyond Consigli into the bottom-right corner of the net.

Babacar was allowed a free header to pull one back in stoppage time, but it was Costa's behaviour and subsequent dismissal that really took the shine off Juve's celebrations.

What it means: Champions at full strength going into Europe

Juve made it four wins from four in Serie A despite leaving the likes of Costa, Juan Cuadrado, Giorgio Chiellini and Miralem Pjanic out of the starting line-up, leaving coach Massimiliano Allegri will have a strong and healthy squad to pick from for the start of the club's latest Champions League campaign.

Pat on the back: In-form Ronaldo can inspire the Old Lady

Allegri's men went into this game having failed to hit top gear in their opening three matches, but as Ronaldo got into his stride in the second half the stadium began to buzz. With the monkey off his back, the 33-year-old cut out his attempts at audacious long-range shots and ambitious passes, instead playing with the kind of poise and composure that will light up Juve's season if he can maintain his best form.

Boot up the backside: Costa madness will enrage Allegri

Ronaldo will claim the headlines, but Costa will be under intense scrutiny in the coming days and weeks after three appalling incidents in the closing minutes of the game. After swinging an elbow at Di Francesco, he headbutted him right in front of the referee and then spat in the forward's face. Allegri will be furious at the Brazilian for almost ruining an otherwise thoroughly successful day for his team.

- For the first time in Serie A, Juventus have won all the first four league games for two seasons in a row.

- Cristiano Ronaldo scored his first Serie A goal after 320 minutes of playing time.

- Ronaldo scored with his 28th attempt in Serie A, as in his last LaLiga campaign.

- Juve have failed to score in the first half in five of their last 11 league games.

FT - @Cristiano's brace gives us all three points at the Stadium! #FinoAllaFine#ForzaJuve#JuveSassuolopic.twitter.com/EdfuoqwM5u

Juve travel to Spain for Wednesday's Champions League Group H clash with Valencia before taking on Frosinone in the league next weekend, while Sassuolo entertain Empoli on Friday.