Ibrahimovic: I'm happy for Toronto, they'll be remembered as my 500th victim 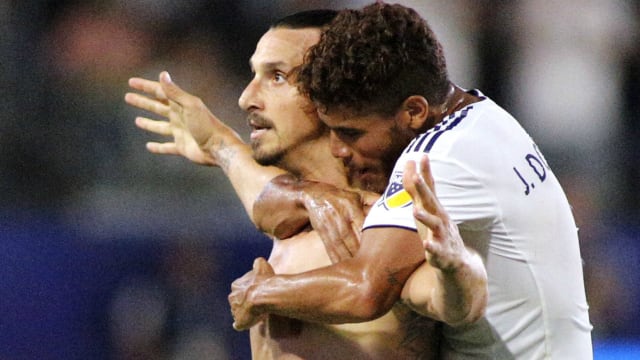 Zlatan Ibrahimovic said he is "happy for Toronto because they will be remembered as his 500th victim" after the LA Galaxy superstar scored a landmark goal.

The 36-year-old striker celebrated the milestone thanks to an outrageous roundhouse finish in LA's 5-3 MLS loss to Toronto – Ibrahimovic spinning and volleying with the outside of his foot in the first half.

Speaking afterwards, Sweden's all-time leading scorer with 62 goals told reporters: "I am happy for Toronto because they will be remembered as my 500th victim."

It took Ibrahimovic's season tally to 17 goals and the former Manchester United star added: "I was close to the goal. It reminds me of a goal I did in Ajax. It came from a cross and I turned around and hit it. I was just trying to hit the goal and it went in."

"I mean, from my personal objective it's fantastic," continued Ibrahimovic. "I probably have more goals than the guys on the field have games together. Of course, it's huge.

"I don't know how many have scored 500 goals in their career, but I am one of them and if would feel nicer if we win the game but still, I did it so there is nothing I will hide from."

Ibrahimovic was PSG's top goalscorer with 156 goals before Edinson Cavani broke his record in January.