Manchester United produced arguably their most complete performance of the season as they beat Watford 2-1 at Vicarage Road to end their hosts' 100 per cent start to the campaign.

A defeat for United would have seen them suffer three losses in their opening five Premier League games for the first time, but they picked up where they left off against Burnley prior to the international break, professionally dealing with an in-form Watford side.

Although the hosts initially looked bright, United finished the first half utterly dominant and 2-0 up thanks to Romelu Lukaku and Chris Smalling, whose goals were three minutes and 11 seconds apart. 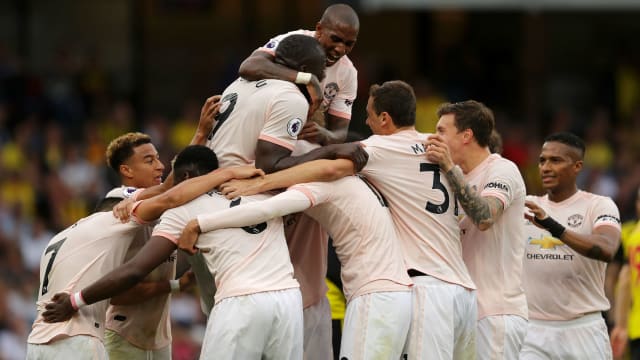 Watford at least made things interesting with a 65th-minute Andre Gray strike, but United dug deep and fended off the home side's late advances to seal the points despite Nemanja Matic's red card deep into stoppage time.

Confidence appeared to be flowing through Watford early on and they went close to the opener through Troy Deeney, but David de Gea was United's saviour, tipping the striker's effort over.

United did manage to settle, however, and ultimately capitalised on De Gea's heroics with two quickfire goals late in the half.

Lukaku bundled in the first when latching on to Ashley Young's deflected cross 10 minutes from the break, before Marouane Fellaini headed a corner back into the danger zone and Smalling smashed home.

United were not quite so dominant after the restart and Watford found a foothold which ultimately allowed them to reduce the arrears – Gray finding the top-right corner from Abdoulaye Doucoure's cut-back.

Unfortunately for Watford, that goal was not the start of a famous turnaround, and United clung on to a second consecutive victory after Matic received a second caution, De Gea denying Christian Kabasele from the resulting free-kick.

After consecutive defeats against Brighton and Hove Albion and Tottenham, United are looking a little more settled.​ Jose Mourinho may have drawn attention to himself in Friday's news conference with his Marcus Rashford rant, but his behaviour certainly did not appear to have any negative impact on the pitch. Even after Gray's goal, United showed character and held firm.

Pat on the back: Smalling with the big performance

He might not have been able to help United keep a clean sheet, but he made a vital impact at the other end and was generally in charge at the back, dealing with the typically difficult Deeney particularly well for the most part.

Roberto Pereyra has started the season impressively, playing arguably as well as he ever has in the Premier League, but he was not at his best. A couple of tussles with Antonio Valencia offered encouragement, but he failed to build on that.

- Watford have lost 13 of their last 14 matches against Manchester United in league competition, with their solitary win coming at Vicarage Road in September 2016 (3-1).
- Jose Mourinho has won six of his seven Premier League encounters with Watford (L1), including each of the last four.
- Romelu Lukaku has scored 20 goals in 39 Premier League matches for Manchester United. Only three players will have reached 20 goals for the Red Devils in fewer games - Ruud van Nistelrooy (26 games), Robin van Persie (32) and Dwight Yorke (34).
- Lukaku has scored three goals and assisted two in his six league meetings with Watford.
- United's Chris Smalling has ended up on the winning side in all 11 Premier League games in which he has scored, the joint best such record in the competition (also 11 games for Ryan Babel).

A hectic week follows for United, who begin their Champions League campaign at Young Boys on Wednesday, before returning to Premier League action at home to Wolves. Watford, on the other hand, travel to Fulham next Saturday.