High-flying Bournemouth have not peaked yet – Howe 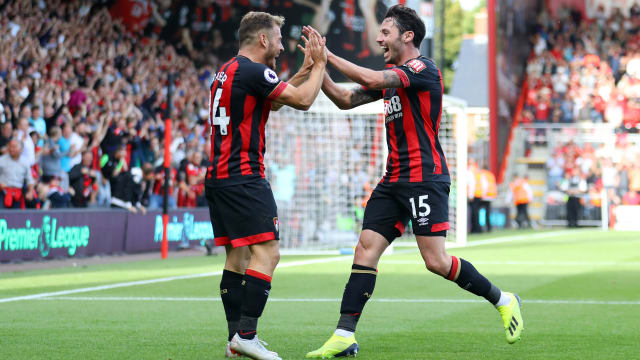 Eddie Howe believes the best is still to come from Bournemouth after their fine start to the new Premier League season continued with an action-packed 4-2 home win over Leicester City.

Two goals from Ryan Fraser, a Josh King spot-kick and Adam Smith's strike saw Bournemouth surge up to fifth in the table, with efforts from James Maddison and Marc Albrighton coming too late for Leicester after Wes Morgan had been sent off.

Howe is thrilled to sit above sides like Tottenham, Arsenal and Manchester United in the early-season table but will not get carried away by Saturday's victory as he targets further progress in the weeks ahead, with a game at struggling Burnley to follow next.

"We are delighted with the result, but we knew before the game we have got a lot more improving to do," he said to BBC Sport.

"We are aware of the table, we were aware of it last year when we had no points after four games but we know you are judged at the end of the season - not now.

"We have won but know the team is not at its peak yet. We have got players trying to bed in and get the same ideas."

Howe added: "We were very effective. I felt we dealt with the physicality well and were efficient in front of goal.

"Without wishing players to be sent off I thought Harry Maguire should have had a second yellow [for a first-half foul on King]."

It's a great afternoon for the Cherries despite two late consolation goals for the Foxes#BOULEIpic.twitter.com/IxwG1XiUhu

After his side lost for the third time in five league games, Claude Puel accepted there were improvements to make despite disagreeing with the 69th-minute red card for Morgan - awarded for a second booking when he was adjudged to have fouled Smith - and the earlier penalty award to King.

"It's important not to forget this experience for us," he told BBC Sport.

"The sending off was harsh on Wes Morgan. I will not always agree with the decision. The penalty we conceded too was difficult. We have to correct our problems and not just look at decisions.

"We played a good team, [but] it was not a fair reflection in the first half because we started well. We had the first chances to score. In the first two moments at the other end we concede two goals.

"It's a shame. We put quality on the pitch with good moves and good chances and it's important together to have a good mind and a good reaction.

"To score two goals at the end with 10 men I appreciate it. I am proud of my players and my squad."