Three of the goals were scored in the first half as Eddie Howe's men surged up to fifth in the early season table, with a double from Fraser followed up by Joshua King's penalty.

Leicester never looked like getting back into the match after the break and any chance of a comeback was seemingly ended when captain Wes Morgan was sent off with 21 minutes remaining. 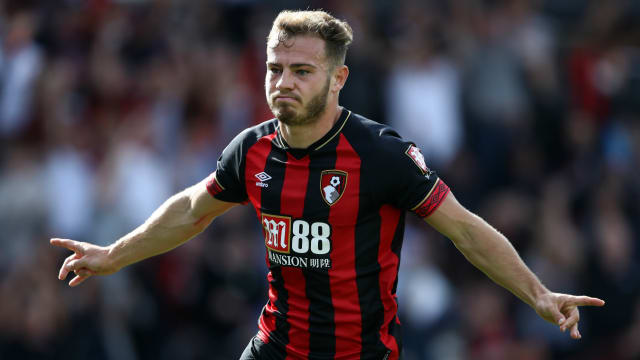 Adam Smith struck nine minutes from time as Bournemouth made the most of their numerical advantage and, although the Foxes pulled goals back through James Maddison and Marc Albrighton, Claude Puel's side have now lost three of their five top-flight games this season.

Bournemouth netted first in the 19th minute through Fraser who, having earlier had a penalty claim turned down after a challenge from Ricardo Pereira, took a pass from King, cut inside from the left and fired a low, right-footed shot into the bottom corner from 18 yards.

Seven minutes before the break, Bournemouth doubled their lead when Callum Wilson's throughball caught out the visitors' high defensive line and that man Fraser slipped a left-footed finish through the legs of Kasper Schmeichel.

And it was three for Bournemouth in the 41st minute, Pereira penalised for handball as he battled for possession in the area with King, who stepped up to take the resulting spot-kick himself and calmly send Schmeichel the wrong way with a low effort.

Leicester brought on Kelechi Iheanacho and Albrighton around the hour mark, but a miserable day at the office got worse when Morgan saw red, the defender getting a second booking for what referee Craig Pawson deemed was a foul on Smith as he put in a series of challenges around midfield.

Smith then had another key involvement, firing a first-time finish past Schmeichel from 15 yards after an excellent assist from Fraser.

Leicester, though, ensured some respectability in the scoreline with a pair of strikes in the final two minutes. Maddison sent Begovic the wrong way from the spot after Diego Rico had fouled Pereira, before Albrighton's glancing header from Iheanacho's cross found the bottom corner.

What it means: Pressure on Puel

With Jamie Vardy back from a three-match ban and a new five-year deal for Harry Maguire, a positive result could have put Leicester in a great position going into a reasonable looking run of fixtures. Instead, Claude Puel now faces pressure to turn results around with what is a talented squad.

Ahead of the game, Howe said Bournemouth still had plenty to prove, but having 10 points in the bank after only five games puts him in a great position as the Cherries continue to progress in the Premier League.

Pat on the back: Fantastic Fraser makes the difference

It was a huge boost for Bournemouth when Fraser was passed fit after coming into the game as an injury doubt, having missed Scotland's match with Albania. The all-important first goal was a moment of real quality and the second – his fourth of the season in all competitions – was also well-taken before he set up his side's fourth late on in a match where Wilson, King and Begovic all put in distinguished displays too.

Boot up the backside: Foxes backline found out

Leicester came into the match on a high after Maguire signed his contract, but the England defender, Morgan and Pereira all had afternoons to forget as they were caught out by Bournemouth's speed and movement on the counter-attack, leaving Schmeichel repeatedly exposed. Leaking four goals will come as a shock, after the opening five matches of the season, including games with Manchester United and Liverpool, never saw Leicester concede more than two.

Bournemouth have a great chance to continue their impressive run as they travel to struggling Burnley next Saturday, which is when Leicester will look to get back on track with a game at home to Huddersfield Town.