Canelo v GGG II: A look back at the best wins for the middleweight rivals 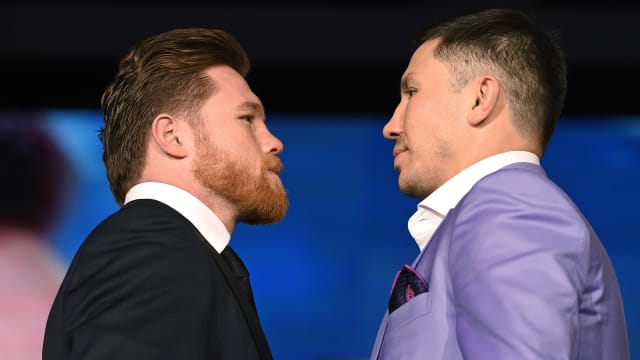 The first fight between Gennady Golovkin and Saul Alvarez was due to decide the identity of the top middleweight in the world. Instead, it left us without an answer and with a whole heap of questions.

A draw failed to settle the argument, but thankfully on Saturday the two rivals will meet in an eagerly anticipated sequel.

Both will be back at the T-Mobile Arena with a point to prove. Golovkin - who saw his 38-fight winning streak come to an end - landed more punches in the initial bout but was less accurate than Canelo, who scuppered initial plans for a May rematch when he failed a drugs test.

Now, though, the time has finally come for two of the best pound-for-pound fighters in the world to do battle again. Ahead of the Las Vegas blockbuster, we've picked out three of the best victories - listed in chronological order - for each in their careers so far.

Extreme tension, dislike, & bad blood between both @Canelo & @GGGBoxing results in both fighters refusing to face off for their #CaneloGGG2 Final Press Conference @MGMGrandpic.twitter.com/qG2404jhQo

"I'm done." Those were Monroe's words when referee Jack Reiss asked if he wanted to continue in the sixth round after going down for a third and final time in the bout.

The American southpaw had already been dropped twice in the second as he failed to keep his opponent at bay. GGG stalked him mercilessly, unconcerned by what came back his way as he cut off the angles and closed the gap.

It was a 20th straight stoppage win for the Kazakh, enhancing his reputation as a power puncher with a ruthless streak.

The Madison Square Garden crowd witnessed a one-sided beating; IBF champion Lemieux was knocked down in the fifth round before finally being put out of his misery in the eighth, referee Steve Willis stepping in to call a halt to proceedings.

Golovkin’s only mistake was hitting the Canadian late after the first knockdown, a right hand leading to an apologetic bow and an outstretched glove of regret before he resumed doling out the punishment.

The beaten fighter complained in the aftermath that the stoppage came too soon – he should have been thanking the official for calling off the onslaught.

Golovkin against Jacobs was expected to be a battle to see who could land the knockout punch first. Instead, it became a tactical tussle.

The Miracle Man - a suitable nickname after overcoming bone cancer - nearly pulled off a shock thanks to a tight defence and his propensity to switch stances from orthodox to southpaw, stopping his rival from getting into a rhythm.

Yet GGG overcame all obstacles – including a disadvantage in height and weight – to win by unanimous decision on points, marking the first time he had gone 12 rounds. Golovkin said after the verdict: "Daniel is my favourite fighter – I cannot destroy him."

WBC light-middleweight champion Alvarez added the WBA title with a points victory in his unification clash with Austin Trout, who lost not just a belt but also his unbeaten record.

In front of a raucous crowd at the Alamodome in San Antonio, Canelo picked his moments to show off his skills, including landing a counter right in the seventh that put Trout on the canvas for the first time in the southpaw's career.

The semi-open scoring system - corners were told of the situation after four and eight rounds - caused a stir, but the Mexican was given the nod in the final reckoning by all three officials.

After a split-decision success over the tricky Erislandy Lara, Alvarez found Kirkland - dubbed a mini Mike Tyson due to his aggressive approach and raw power - far easier to deal with.

The Mexican was backed up early but put a stop to Kirkland's forward progress by utilising his uppercuts, setting up a right hand over the top that led to the fight's first knockdown in the closing stages of the opening round.

Kirkland was saved by the bell and looked to have cleared his head as he set the tempo in the second, only to be caught by another right in the next, sending him spinning to the canvas. It was a sensational, spectacular stoppage that sent out a statement.

Canelo became more than just the new WBC middleweight champion when he out-pointed Cotto. It was more than a win for Mexico over Puerto Rico, too.

While Cotto was 35, he had won three on the spin in the division and was in excellent shape. Junito gave it his all but was out-fought and out-thought by the younger man.