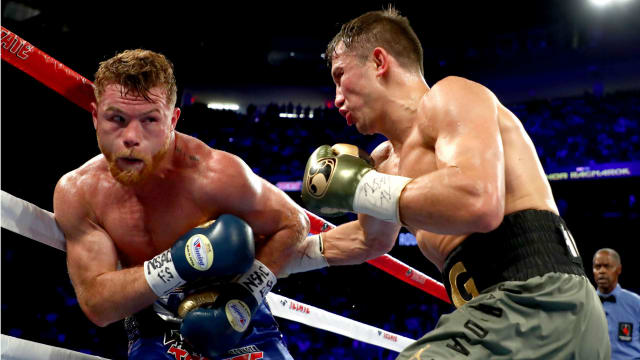 Saul 'Canelo' Alvarez has hit back at allegations made by Gennady Golovkin that the Mexican was covered in injection marks before his doping ban.

A scheduled rematch between the pair had to be postponed earlier this year after Canelo tested positive for clenbuterol, blaming contaminated meat eaten in his homeland for the finding.

Canelo, who was later banned for six months by the Nevada State Athletic Commission, and Golovkin will finally meet again on Saturday following their draw last year, but the Kazakh has used the build-up to cast doubt on his opponent's version of events.

"Pharmaceutical experts have determined that it was doping and not contaminated meat. I think it's nonsense and I don't like it.

"Everywhere, on biceps, stomach, pretty much everywhere. All over his body you could see injection marks.

"But right now it's the last thing that worries me. I am worried about the fight, that's the most important thing.

"It makes no sense to guess whether or not he had taken something [before the first fight]. The commission has allowed him to fight. The important thing was that he got caught the second time."

Responding to Golovkin's allegations, Canelo said: "Those are the kicks and screams of someone who is drowning. Those are the excuses that they are making because of what is coming on Saturday – which is a loss for them.

"I spend all my time in Mexico – that's where I reside, where I live and where I spend time with my family. When I come to train, I come and do it in San Diego.

"It's different in the United States, where [meat] is checked by the authorities and the government. It's a little bit different in Mexico where they don't have those sanctions and checks.

"When I was in Mexico I wasn't on a diet, I wasn't training, I wasn't on some eating plan, so may have eaten it a few times a week. In Mexico, unfortunately, I now have to stop doing that because of what happened."