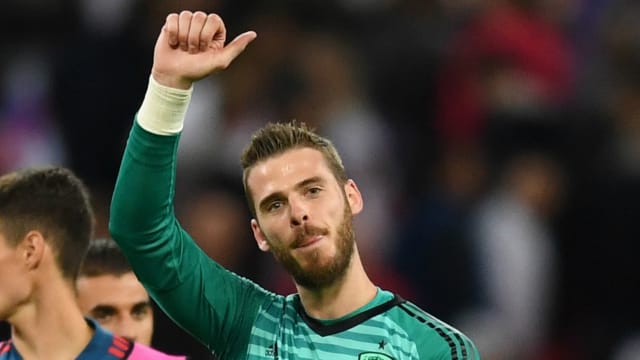 Luis Enrique lauded David de Gea as one of the best goalkeepers in the world after the Manchester United man's performance in Spain's 2-1 victory over England at Wembley.

De Gea ensured Luis Enrique's first game in charge of La Roja yielded three points when he made a superb save to deny Marcus Rashford a possible equaliser in the first half and was involved in a controversial moment when England were denied a share of the points in injury time.

Danny Welbeck thought he had made it 2-2 when he put the ball in Spain's net, only to have the goal ruled out for a foul on De Gea as the keeper attempted to bring the ball to ground.

After he was criticised for his part in Spain's disappointing World Cup campaign, which ended in elimination at the hands of Russia in the round of 16, De Gea's performance against England saw him singled out for praise from Luis Enrique.

"He is one of the best goalkeepers in the world and has proven it in the Premier League week in, week out.

"I never had any doubts. Errors sometimes help you to improve and grow up."

Atletico Madrid midfielder Saul Niguez, who equalised for Spain in the first half after Rashford had given England the lead, also won plaudits.

"As for Saul, I like him very much," Luis Enrique said of the 23-year-old.

Despite his satisfaction with the result, which came courtesy of Rodrigo's decisive goal before half-time, Luis Enrique told his players to look ahead to their next Nations League match against World Cup finalists Croatia rather than dwell on the victory.

"I think this does good for everyone," he added. "It is the best way to start, winning against England at Wembley.

"Football is about the present and this is now the past. We are thinking about Croatia on Tuesday.

"Overall, it is a great victory."