England will not risk Shaw - Southgate 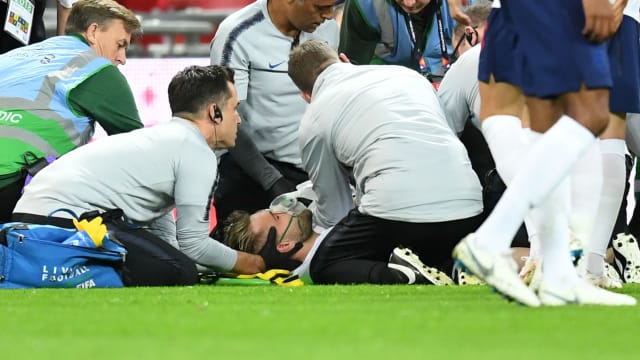 Gareth Southgate has promised not to take any risks with Luke Shaw's health after the England wing-back sustained a head injury in the 2-1 Nations League defeat to Spain.

Shaw collided with Dani Carvajal early in the second half and landed heavily on the turf, where he was treated for six minutes before leaving the field on a stretcher, wearing a neck brace and an oxygen mask.

The Manchester United defender tweeted after the match, pledging to be back soon and Southgate told a post-match news conference the player was sitting up and talking to team-mates in the dressing room.

Nevertheless, Tuesday's friendly against Switzerland in Leicester might come too soon for Shaw, who brilliantly set up Marcus Rashford's opener before being caught out by Carvajal in the build-up to Saul Niguez's quickfire leveller for Luis Enrique's visitors.

"He's sat up in the dressing room and talking and seems fairly comfortable," Southgate said. "We'll have to assess him overnight and tomorrow.

"It's difficult to tell whether he was unconscious. We'll go through some tests. It was a nasty fall and collision. We won't take any chances with his health."

Luke is awake and alert, having been assessed by our doctor and given an X-ray.

He'll stay with us overnight for further observation, with another update to come in the morning. pic.twitter.com/OZ7EV1SDWb

On Shaw's overall display as he won a first international cap for 18 months, the England manager added: "It's great contribution for the goal and it's a big thing. We've thrown him in after a few games of the season.

"We've got quite a few players who are short of fitness and short of a bit of sharpness. To come into a game like that after so long out of the international scene is as tough a test as you can have

"That balance of having a left footer, with him and Danny [Rose], was an advantage in several situations."

Overall, Southgate conceded Spain were the superior side after Rodrigo's 32nd-minute finish from Thiago's free-kick proved the difference.

Nevertheless, he argued the Three Lions had legitimate cause for complaint after substitute Danny Welbeck was adjudged to have fouled Spain goalkeeper David de Gea before netting what Wembley thought was a stoppage-time equaliser.

"I think the two defenders tried to block Danny out of it, De Gea came over the top and dropped it. It's clear for everybody to see it should have been a goal," he said.

"But over the 90 minutes we have to accept Spain were better than us for long periods of the game.

"Their use of the ball was top class. Our pressing was a bit disjointed but even when you press well they have wonderful players who can wriggle out of problems.

"I'm proud of how we finished the game. I've seen teams fold in that situation but we finished really strongly.

"Given where we're at, we need those experience to improve and I couldn't ask any more of the players."