England 1 Spain 2: Luis Enrique off the mark after comeback victory 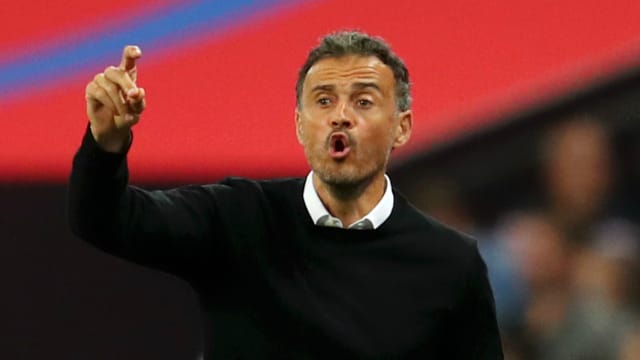 Luis Enrique won his first game in charge of Spain as La Roja came from behind to beat England 2-1 at Wembley in the Nations League.

It was a disappointing night for World Cup semi-finalists England, who took an early lead through Marcus Rashford but were behind within 22 minutes after goals from Saul Niguez and Rodrigo Moreno.

Luke Shaw, making his first international start in three years, was taken off on a stretcher wearing a neck brace and oxygen mask early in the second half after a clash with Dani Carvajal, and the hosts failed to mount a comeback in his absence.

Spain were fluid and fluent throughout their first match under Luis Enrique and, after their shock World Cup last-16 exit to hosts Russia ended a tumultuous campaign, will go confidently into their next game against Croatia, though a late foul by substitute Danny Welbeck meant they will not do so on the back of a draw.

Harry Kane released Shaw down the left and the full-back picked out his Manchester United team-mate Rashford with a precision pass that was slotted past David de Gea in the 11th minute.

Two minutes later Carvajal rounded Shaw and squared to Rodrigo, who cut the ball back to Saul for a first-time finish inside Jordan Pickford's near post.

The loss of Shaw early in the second half deprived England of a valuable attacking outlet and they struggled to create chances thereafter.

Welbeck had the ball in the net deep into the allotted nine additional minutes only for him to be judged to have fouled De Gea in the process and the goal was ruled out, ensuring Spain left with all three points.

The #ThreeLions looked to have equalised through @DannyWelbeck, but it's ruled out.

What does it mean: Southgate must ponder porous defence

England have conceded six goals in their last three games in all competitions and Gareth Southgate will feel Spain were allowed back into the contest far too easily, particularly after Harry Maguire played Rodrigo onside for their second.

Pat on the back: De Gea back to his best

Criticised for his poor shots-to-goals-conceded ratio at the World Cup, De Gea produced a superb save to deny Rashford's header and preserve Spain's lead in the 35th minute, giving his defence the confidence to shut England out from then. The keeper was perhaps fortunate referee Danny Makkelie deemed he was fouled by Welbeck before the Arsenal striker tucked home late on.

Boot up the backside: Henderson must learn to relish big games

After struggling in the World Cup semi-final against Croatia, Jordan Henderson once again failed to rise to the occasion against one of Europe's best teams and if England are to become a major force he must begin to dictate play from midfield.

England must wait until October to attempt to make up lost ground in the Nations League with games against Croatia and Spain, but before then they face Switzerland in a friendly. Spain, meanwhile, face another group game at home to the World Cup finalists on Tuesday.