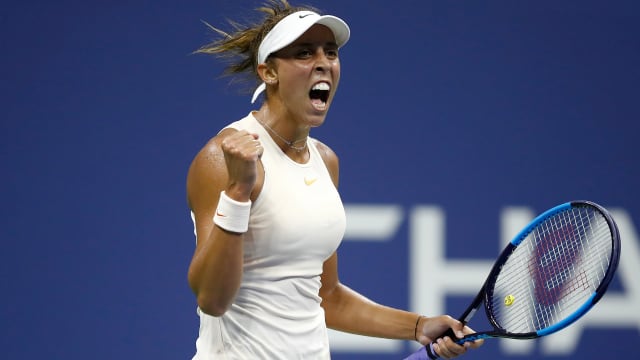 Madison Keys will contest a second successive US Open semi-final after accounting for Carla Suarez Navarro in straight sets.

Keys made it all the way through to the final last year before she was stopped by fellow American Sloane Stephens at Flushing Meadows.

But Keys – the highest seed remaining in New York at 14 – will get another opportunity to feature in the final following her 6-4 6-3 win over Suarez Navarro on Wednesday.

Keys, who is also an Australian and French Open semi-finalist, will face Japanese sensation Naomi Osaka for a spot in the decider.

.@madison_keys reaches the 3rd semifinal in her last 5 Major appearances as she defeats Suarez-Navarro 6-4, 6-3 under the lights!#USOpenpic.twitter.com/VOGVMyJKCp

Suarez Navarro enjoyed a fine run in New York, where she upstaged sixth seed Caroline Garcia and ended Maria Sharapova's impeccable record under the lights in the Big Apple, however, the 30th seed could not match Keys.

It was a routine start to the match in front of a relatively subdued crowd, still filling the stadium ahead of the men's quarter-final between Novak Djokovic and John Millman.

Breaks were at a premium in the first set, both players holding serve until Suarez Navarro cracked at a decisive moment in the 10th game.

Keys had the chance to close out the set on Suarez Navarro's racquet at 5-4 and while she was denied at the first time of asking, she did not waste her second opportunity.

The second set followed a similar pattern, Keys claiming the only break in the sixth game and she never relinquished it en route to the final four.