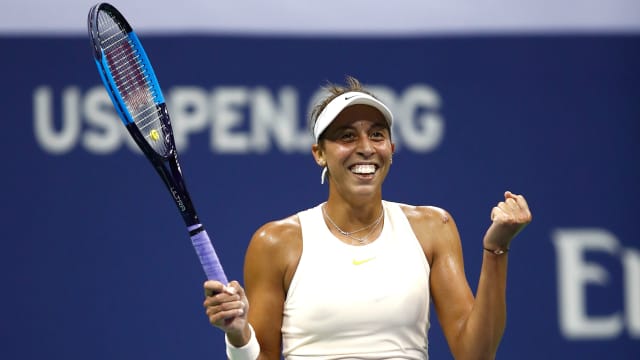 Madison Keys said she is no longer riding a rollercoaster of emotions as last year's US Open runner-up eyes a maiden grand slam in New York.

Keys was a 2017 finalist at Flushing Meadows, where the American was swept aside by countrywoman Sloane Stephens in her first appearance in a slam decider.

The 23-year-old – also an Australian and French Open semi-finalist – is back in the final four of the US Open for a second successive year following Wednesday's 6-4 6-3 win over Carla Suarez Navarro.

And 14th seed Keys is feeling good emotionally and mentally as she prepares to face Japanese sensation Naomi Osaka in the semis.

"I think I've gotten a lot better managing my emotions once it gets to this part and knowing that everything is going to be probably more amped up, and not shying away from those but just really being honest about it and talking about it," Keys told reporters post-match.

"Just embracing the moment. Just trying to remind myself to actually have fun and enjoy the experience."

The reward for @Madison_Keys’ victory is a semifinal battle against the hard hitting Naomi Osaka... pic.twitter.com/dHP7QR8Q9n

"I feel like last year a lot of my matches were kind of emotional rollercoasters," Keys continued. "And this year I feel like I have been much more solid mentally, and in tougher times keeping my cool a little bit better and not having to have the big emotional swing to kind of try to get back into matches.

"I'm a lot less emotionally drained this year. You know, I'm waking up at normal times every morning, so that helps, too."

Keys added: "I think that I am doing whatever I can to put myself in the position to go deeper into slams. I think I'm feeling more comfortable in those big moments and like matches like tonight.

"So I think just training hard the week before and trying to not put too much pressure on myself has really helped me do that.

"I have had some big moments that before I was losing and was probably putting too much pressure on myself and all of that, so just learning from those experiences, you know, just having a better mentality about the whole situation and remembering what my game plan is and just focusing on that instead of the actual occasion."

.@madison_keys reaches the 3rd semifinal in her last 5 Major appearances as she defeats Suarez-Navarro 6-4, 6-3 under the lights!#USOpenpic.twitter.com/VOGVMyJKCp

Keys broke in each set to overcome Suarez Navarro and the Spanish 30th seed said: "I didn't really serve good tonight, and she was returning in pressure situation every time because I don't have a big first service.

"I think this was really important part of the game. She was really good with her serve. I cannot return like I used to and during the match or during the points, I think we have good rallies, but she was better today. She was fresher than me. Faster, you know. That's it."