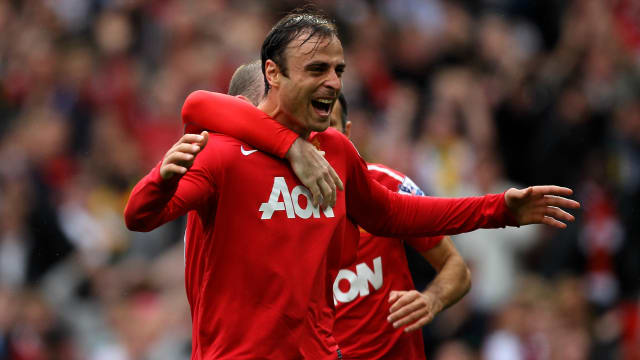 Dimitar Berbatov says Manchester United's history and tradition made it easy to dismiss a lucrative offer to join Manchester City in 2008.

He featured in the Champions League final loss to Barcelona in his debut campaign and went on to become a fan favourite, although the 37-year-old claims he could well have turned out for United's crosstown rivals.

Approached amid an overhaul that saw Robinho, Vincent Kompany and Pablo Zabaleta head to the Etihad Stadium, Berbatov insists he only ever had eyes for Alex Ferguson's side.

"I don't think it was that close, to be honest," the striker told FourFourTwo. "My agent told me about some interest but I said, 'Don't even bother mentioning anyone else, I'm going to Man United,' because of the history, the players, the tradition, everything.

"I think it was the night before City signed Robinho from Real Madrid and my agent said: 'Berba, there's another team in for you.' I said: 'F*** off, we're going to Man United.'

"He said: 'But they'll give you more money!' It's not all about the money sometimes, though. I was like a horse with blinkers.

Describe Berba in one word...

"For me it was the right decision because going to the top of the mountain was my dream, especially when you come from Eastern Europe, from a small town, and no one has done it before you.

"It was a great feeling."

Berbatov left United for Fulham in 2012 and had subsequent spells with Monaco, PAOK and Indian Super League side Kerala Blasters.