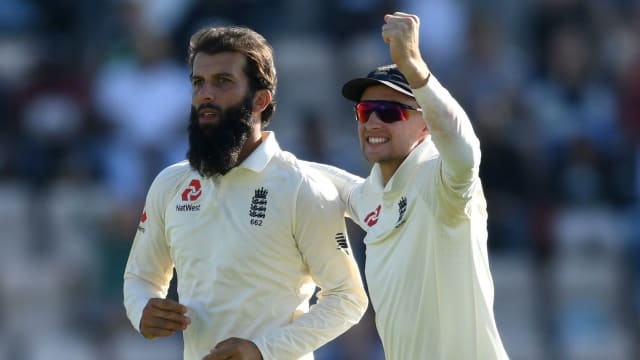 Moeen Ali sent India's second innings into a tailspin as England wrapped up the series with a Test to spare thanks to a 60-run victory at the Rose Bowl.

Set 245 runs for a win that would level the series at 2-2, Virat Kohli and Ajinkya Rahane rebuilt after the loss of three early wickets to give the tourists hope of a series-levelling triumph.

The duo put on a century stand as India reached 123-3, only for Moeen to turn the game in England’s favour with the key wicket of Kohli for 58 just prior to tea on the fourth day.

With their talismanic captain gone, India collapsed. They lost their final five wickets for 34 runs, Tom Curran claiming the last of them as he trapped an injured Ravichandran Ashwin lbw for 25.

Curran had started an eventful day in the thick of the action too, the all-rounder at the crease as England resumed on 260-8. They suffered an early blow in their bid to extend their overnight 233-run lead, though, when Stuart Broad (0) edged the opening delivery from Mohammed Shami.

ENGLAND HAVE WON THE SERIES!!!

The seamer – who had dismissed Adil Rashid (11) to bring about stumps on the third day – missed out on a hat-trick but India did not take long to wrap up the innings for 271, Curran the last to go as he was run out for 46.

India's pursuit of a tough total started badly, James Anderson removing Shikhar Dhawan (17) and Cheteshwar Pujara (5) after new-ball partner Broad had cleaned up KL Rahul (0) with a delivery that barely got above shin height.

Kohli and Rahane launched a fightback from 22-3, though the former was perhaps fortunate to survive an lbw call when third umpire Joel Wilson deemed the use of technology showed an inside edge on a Moeen delivery destined for the stumps.

The recalled off-spinner did get his man late in the second session, though, a deflection off glove and front pad looping kindly to Alastair Cook at short leg to end a 101-run partnership.

Moeen also ended Rahane's resistance on 51, while the dismissals of Rishabh Pant (18) and Shami (8), who were both caught in the deep trying to be aggressive, gave him figures of 4-71 in the innings and nine wickets in the match.

Curran completed the job by getting Ashwin (25) out, albeit replays showed the ball was going on to miss the stumps, as England moved into an unassailable 3-1 lead with the final Test at the Oval still to come.