Pierre-Emerick Aubameyang and Alexandre Lacazette's burgeoning strike partnership came to the rescue as Arsenal eventually shook off Cardiff City to claim a 3-2 win in the Welsh capital.

Shkodran Mustafi headed the visitors into an 11th-minute lead before Neil Warnock's side averted a seventh consecutive goalless half in the top flight this season when Victor Camarasa pounced in stoppage time.

Unai Emery brought Mesut Ozil and Lacazette into his XI and both were involved in Aubameyang's brilliant 62nd-minute goal, only for Danny Ward to find a swift response. 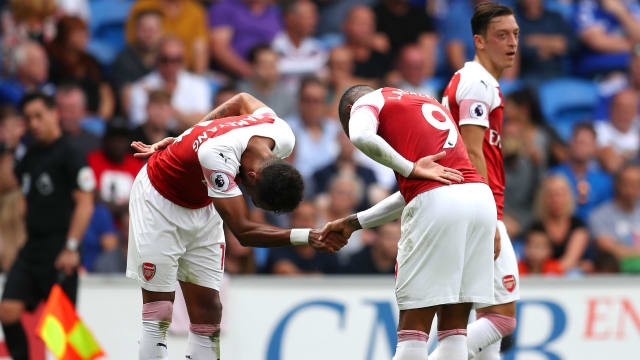 Lacazette was harshly adjudged to have fouled Harry Arter for the free-kick that led to Ward's leveller but the French striker had the last laugh on his first start of the campaign, darting around Sol Bamba and blasting beyond Neil Etheridge at the Cardiff goalkeeper's near post.