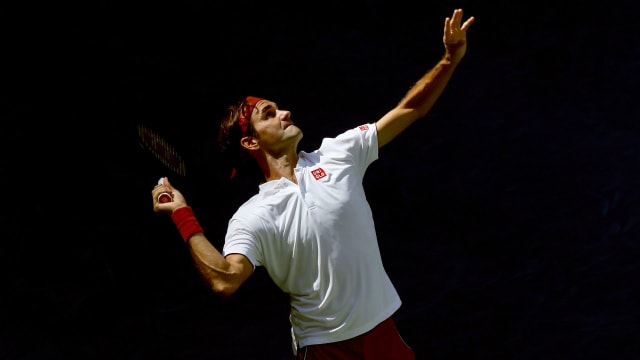 Roger Federer was happy to laugh off the fact Nick Kyrgios appeared to imitate his serve in their third-round tie at the US Open.

After edging a first set in which he was forced to save four break points, Federer kicked on clinically against a seemingly demoralised opponent to triumph 6-4 6-1 7-5 and continue his quest for a 21st grand slam title.

There were plenty of entertaining rallies in the third set as Kyrgios adopted a particularly flamboyant approach, to no avail.

Yet the Australian had already caught the eye earlier in the match when he appeared to serve in the manner of both Federer and Rafael Nadal.

Asked about the apparent impression in a post-match news conference, a smiling Federer said: "We have all imitated serves. Sure, it's unusual to happen against you with your own serve.

"I knew right away... and I have seen him doing it several times over the last few months. Also, that he's been using my serve sometimes to great effect, which I'm very happy to see. It's a technique that worked. No, I'm joking.

When @rogerfederer steps on court and isn’t messing around #USOpenpic.twitter.com/bkJGkA84MK

There were several other light-hearted moments in Federer's news conference, most notably when a reporter asked: "You hit that great overhead in Italy years ago off [Andy] Roddick's overhead, I imagine you recall it?"

"In Basel," replied Federer with a smile. "I remember. It was not Italy, I can tell you that."

The sheepish reporter apologised amid chuckles in the room, prompting Federer to respond: "No problem. I was able to plug Switzerland, so it's all good."