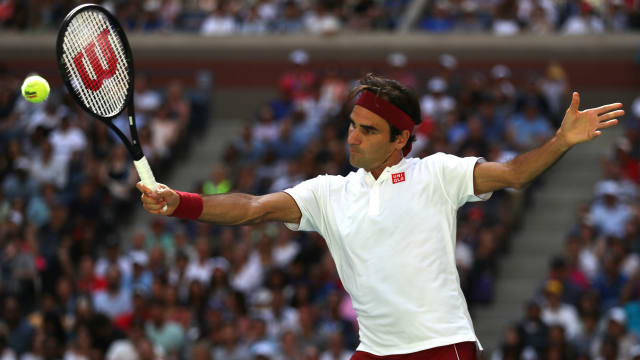 Roger Federer made light work of Nick Kyrgios and charged into round four of the US Open as the talented Australian produced another frustrating showing.

The three past meetings between this duo had all been decided in third-set tie-breaks, Federer winning two to his opponent's one, and Kyrgios initially looked capable of providing a stern test for his illustrious rival once again as he started strongly on Arthur Ashe Stadium.

Yet after Federer broke in the 10th game to snatch the opening set, the level of Kyrgios dipped alarmingly.

Five-time champion Federer, who is seeking his first title here since 2008, duly raced to a 6-4 6-1 7-5 victory, maintaining his perfect record in round three of this event since a debut loss in 2000.

The Swiss will face John Millman in the last 16, while Kyrgios - at the centre of a controversy in the previous round when he received a pep talk from umpire Mohamed Lahyani - must reflect on another failure to fulfil his rich potential.

Flawless stuff from @rogerfederer, brushing off Kyrgios 6-4, 6-1, 7-5 to reach R4...#USOpenpic.twitter.com/Ys9xv4knJp

A ninth tie-break in 10 sets between the pair seemed likely at the start of Saturday's contest when Kyrgios failed to take four break points in the seventh game, as Federer struggled to land first serves.

However, after dropping just one point in his first four service games, Kyrgios allowed his level to drop serving at 4-5 and Federer capitalised. The five-time champion converted his second set point with a classy return winner, sliced off the backhand wing.

Clearly frustrated by the loss of the opener, Kyrgios - who had appeared to imitate the service actions of Federer and Rafael Nadal during the first set - suddenly fell apart.

Set two was over in no time as a typically graceful Federer maintained his focus, Kyrgios at least avoiding the indignity of a bagel as he recovered from 15-40 down to take the sixth game.

The highlight of a more competitive final set, which featured a host of entertaining exchanges, saw Federer draw gasps from Kyrgios with a stunning forehand around the net post that barely reached knee height.