Wozniacki crashes out of US Open, Sharapova to meet Ostapenko 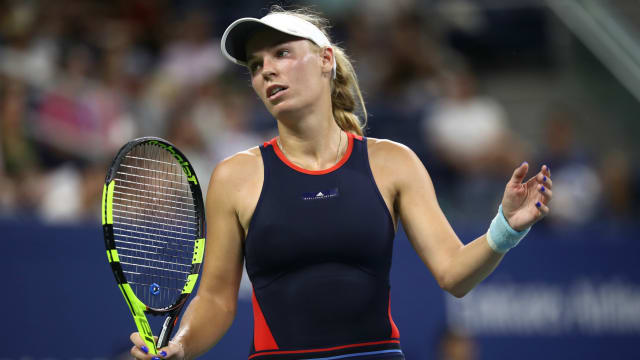 World number two Caroline Wozniacki's woes continued after she was upset by Lesia Tsurenko in the second round at the US Open, while Maria Sharapova earned a showdown with Jelena Ostapenko.

Wozniacki was well below her best as the Australian Open champion suffered a straight-sets defeat to Tsurenko in New York on Thursday.

Former world number one and 2006 US Open winner Sharapova accounted for Sorana Cirstea to set up a meeting against 10th seed and 2017 French Open champion Ostapenko.

Angelique Kerber and Petra Kvitova also advanced to the third around at Flushing Meadows.

It was a forgettable evening for Wozniacki, who was humbled by Tsurenko 6-4 6-2 on Louis Armstrong Stadium.

Wozniacki has suffered early exits at Wimbledon, Montreal and Cincinnati and the Dane added the US Open to that list.

Tsurenko knocks out Wozniacki to set up a R3 encounter against Siniakova.#USOpenpic.twitter.com/K35beI4KiF

Injuries have hampered Wozniacki, who only hit six winners and tallied 33 unforced errors as she bowed out.

"The court is a little bit slower. I should have made better adjustments. I just didn't," Wozniacki said. "Then I was trying to play a little bit higher, maybe change the rhythm, but it just wasn't really going my way. I think the problem also was my serve and returns weren't great today. I feel like if maybe I'd served better, I could have put more pressure on her."

Sharapova won the final three games of the second set to see off the Romanian in an hour, 50 minutes.

Under the Lights:@MariaSharapova improves to 21-0 at night in Flushing Meadows, defeating Cirstea 6-2, 7-5 to set up a R3 clash with Ostapenko!https://t.co/Mb964gKyWM#USOpenpic.twitter.com/1FxtrU6BqG

A total of 26 winners and 33 unforced errors were tallied by Sharapova, who next faces Latvian Ostapenko.

Ostapenko rallied past Taylor Townsend 4-6 6-3 6-4 to reach the third round at the US Open for a second successive year.

Winner of the US Open in 2016, Kerber was up a set and a break and serving for the match at 6-2 5-2 before Larsson staged a comeback.

Larsson reeled off five successive games to force a deciding set but Kerber weathered the storm to survive.

Kerber, who will play Dominika Cibulkova for a place in the last 16, said: "I think it is tennis that you have to play until the last point. She came back. She played good when she was down, and she had nothing to lose then. At the end, it was just like two, three points which decide the match. I was happy that at the end I could serve the match until the end."

There was also a win for sixth seed Caroline Garcia, who recovered from a poor second set to overcome Monica Puig 6-2 1-6 6-4.