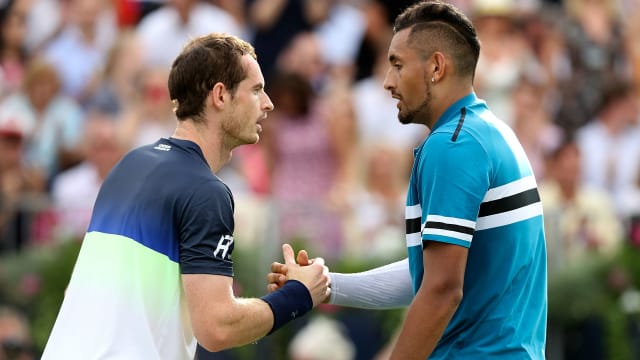 Andy Murray saw the lighter side of Nick Kyrgios controversial conversation with umpire Mohamed Lahyani that dominated day four of the US Open.

Kyrgios had already lost the first set when he left two serves alone to go 3-0 down in the second against Pierre-Hugues Herbert, prompting Lahyani to step down from his chair to talk to the Australian.

The discussion was held on court due to the noise level, according to a statement later released from the US Open, while it was also revealed the official asked the 30th seed if he required medical treatment before warning him over an apparent lack of effort.

Kyrgios turned the match around following the interaction, dropping just six more games as he triumphed 4-6 7-6 (8-6) 6-3 6-0 to set up a showdown with Roger Federer in the third round.

He posted on Instagram after the victory, using a photo of him cupping his ear to the crowd, to which Murray cheekily replied: "When you going to announce mohamed lahyani as your new coach?"

The Scotsman's comment was spotted by Kyrgios, who responded by writing: "Hahahaha good one, dude got 3 games in the last 2 sets, and Mohamed was well seated in his chair lol"

Murray's run at Flushing Meadows had ended on Wednesday, as he lost in four sets to Fernando Verdasco.

However, the rallies between the duo have continued since, with the Spaniard denying claims from the 2012 champion that he spoke to his coach during a 10-minute break afforded the players between the third and fourth sets due to the high temperatures in New York.

As he posted a farewell message to New York on Instagram, Murray added: "I'm off to get a health check as apparently I've started imagining things."