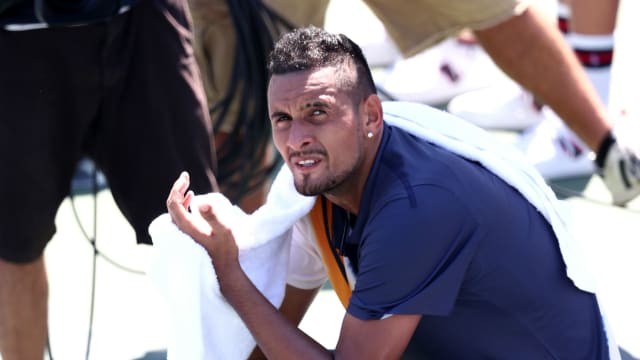 John McEnroe has called for leniency from the US Open towards Mohamed Lahyani after the umpire controversially left his chair to give Nick Kyrgios a pep talk.

Lahyani came in for criticism on Thursday as he chose to speak directly to Kyrgios during the second set of his match with Pierre-Hugues Herbert.

With the Australian a set and 3-0 down, the official was heard telling Kyrgios: "I want to help you" and "I know this is not you".

On Friday, a US Open statement deemed that Lahyani's conduct "went beyond protocol" and, while he will officiate during the rest of the tournament, his performance will continue to be evaluated.

Novak Djokovic gave his support to Lahyani in the aftermath and McEnroe echoed those thoughts, suggesting it was refreshing to see an official interacting with a player.

"This just shows you how bad it was, that this guy, Mohamed Lahyani, felt he had the need to get off the chair - this is how little of an effort Kyrgios was making," McEnroe told ESPN.

"It was so bad and the optics of it were so embarrassing that this guy got off the chair.

He awaits the winner of Federer/Paire!#USOpenpic.twitter.com/gQWIkrTucD

"What he [Lahyani] did, he meant well. This is incredible because [for the first time] in 40 years I'm actually going to defend an umpire. The guy was trying to do the right thing because it's embarrassing for our sport.

"He happens to be the biggest talent we've had in the men's game in terms of pure tennis talent in 10 years, and he's a great kid, he's a great team guy.

"In this particular case, there have been times in the past where umpires - and you see this in other sports, I'm at a lot of basketball games and they talk to the guys, say 'hey you're going too far, next time I'm going to have to call you'. There's a relationship which I always wanted on the tennis court, which you didn't have.

"So this Lahyani guy, he likes the cameras and he likes the limelight, but he's also considered one of the best referees, he's sort of a player's referee.

"But don't penalise this guy. I think they're gonna suspend him and they're gonna do something and marginalise him and say 'this is outrageous and it's unacceptable', and at a certain level it is.

"But Herbert should have won that match, to be frank. And for this guy to get penalised for something where he was actually trying to do something that would be good for the game, I don't want him to be penalised for that."