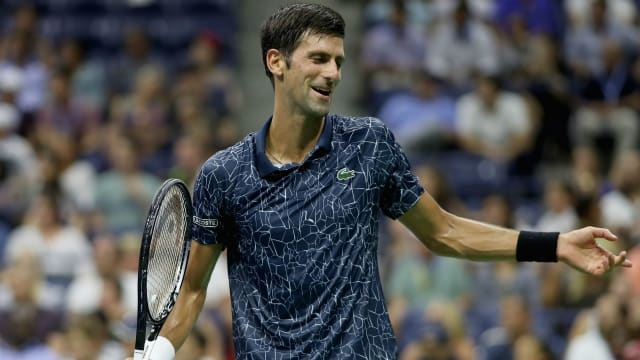 Novak Djokovic believes umpire Mohamed Lahyani was only acting in a "friendly way" following his controversial conversation with Nick Kyrgios at the US Open.

Kyrgios had lost the opening set and was trailing 3-0 in the second against Pierre-Hugues Herbert after twice deciding against returning serves when Lahyani left his chair to talk to him, saying: "I want to help you".

Kyrgios went on to turn the tie around, triumphing in four sets to up a clash with five-time champion Roger Federer, while a statement later released by the US Open made clear the official only went down to speak to the Australian due to the crowd noise, asking him if he required medical attention and issuing a warning over his apparent lack of effort.

Herbert later criticised the United States Tennis Association and the US Open in a statement, adding Lahyani was "overstepping his functions" in coming down to the court.

Djokovic revealed he had not seen the incident prior to his second-round match against Tennys Sandgren but, while having some sympathy for Herbert, he suggested the umpire was just acting in the best interests of the sport.

"I understand why people, maybe Herbert, is upset because that has happened. Obviously it's understandable. A chair umpire should be neutral," Djokovic told reporters.

"But everybody who knows Mohamed knows as well he's quite different from others. He's always very positive, smiles, tries to bring that energy to the court. He likes to make a show, as well, out of it.

"Knowing Mohamed, I really don't think that he meant to do it for any other reason but to really try to help Nick to understand that if he continues doing that, he might get, you know, fined or penalty or whatever, or warning.

"I haven't seen it, as I say. From I what heard, knowing Mohamed, I think he has done it in a friendly way. He didn't want to probably sound that he's threatening Nick.

"Again, I understand as well why people are speculating that should not happen. But I'll check out the video and I'll see more."

Djokovic beat unseeded American Sandgren in four sets in the night session on Thursday, overcoming a lapse in concentration during the third-set tie-break to remain on course for glory at Flushing Meadows.

The Serbian rejected the suggestion in his post-match media conference that the noise from the crowd had played a role in him surprisingly dropping a set, though.

"I think every major has its pros and cons, I guess," he said. "The US Open is most known for its night sessions. When the roof was introduced some years ago, it became even noisier.

"But, as I said, I'm used to it because I've played there many times. You just have to accept it. You can't expect that 23,000 people are quiet.

"That's the beauty of a night session at the US Open. Everybody knows that. Wimbledon is all-white, it's tradition. You can't hear a sound when you play a point. Here it's different. That's why these majors are unique in their own way."