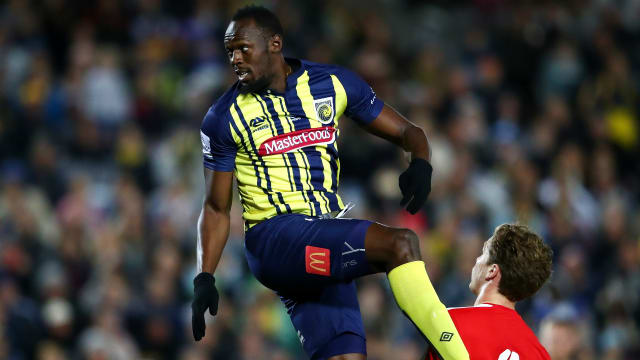 Usain Bolt came off the bench to make his first appearance for Central Coast Mariners in a friendly victory on Friday.

The sprinting great enjoyed a lively outing in the second half of the A-League side's 6-1 victory over a Central Coast Select XI.

Bolt played to the left of the Mariners' attack and caused some nervy moments for the visiting defence at Central Coast Stadium, with one run and shot forcing the goalkeeper into a decent save.

The 32-year-old was inches from getting on the scoresheet, as he just failed to connect with a loose ball at the left-hand post with the goal gaping.

Bolt, who wore the number 95 shirt, admitted he feels short of fitness but expects to be fully ready to contribute to the Mariners' cause by the end of the year.

"I was a little bit nervous but as soon as I got on the pitch, the nerves went," he told Fox Sports.

"I've got to keep pushing myself and I think I'll be fine. I need probably two months to be properly fit but, in four months, I'll be one of the guys."

A moment in sporting history is made. @usainbolt , the footballer, steps onto the pitch in Yellow & Navy. ⚡️ #CCMFC #ALeague pic.twitter.com/3j9ZuEvTsf