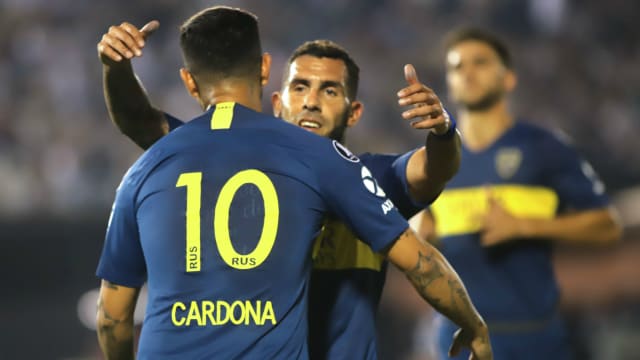 Boca Juniors and Palmeiras will feature in the Copa Libertadores quarter-finals after overcoming Libertad and Cerro Porteno.

Former Juventus and Manchester United forward Carlos Tevez was on target as Argentine powerhouse Boca progressed 6-2 on aggregate thanks to Thursday's 4-2 victory.

Boasting a two-goal deficit from their home leg in Buenos Aires, Boca won again on the road in Paraguay courtesy of Tevez, Cristiano Pavon, Mauro Zarate and Edwin Cardona.

Quick-fire goals from Pavon and ex-West Ham forward Zarate sandwiched in between Oscar Cardozo's brace ensured the scores were level at half-time in Asuncion.

But veteran Tevez came off the bench and fired Boca into the lead with 15 minutes remaining – the 34-year-old volleying past Rodrigo Munoz from point-blank range.

Fellow substitute Cardona converted a penalty five minutes later to cap the scoring for Boca, who will meet Brazilian side Cruzeiro in the last eight.

Palmeiras succumbed to a 57th-minute goal from Santiago Arzamendia after Felipe Melo was sent off inside five minutes but the Brazilian outfit still prevailed 2-1 on aggregate.

There were another two red cards in stoppage time as Palmeiras substitute Deyverson and Cerro Porteno's Marcos Caceres received their marching orders.

Palmeiras will go head-to-head with Chilean giants Colo-Colo for a spot in the semi-finals.