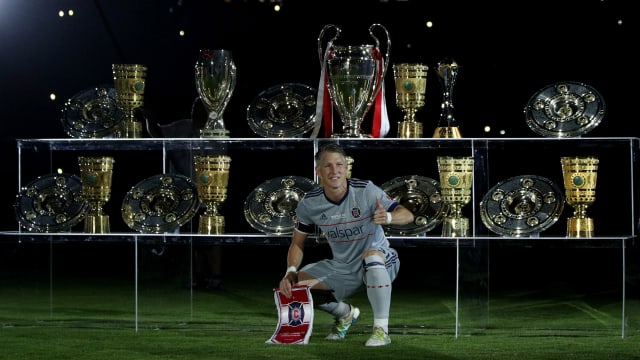 Bastian Schweinsteiger marked his testimonial match between Bayern Munich and Chicago Fire with a goal at a packed Allianz Arena on Tuesday.

The 34-year-old fired home from David Alaba's cross in the second half as Bayern went on to win 4-0 against the MLS side.

Schweinsteiger was honoured on Monday when he was officially inducted into Bayern's hall of fame in recognition of his achievements for club and country.

The midfielder made 500 appearances for Bayern, winning 22 major honours in total, including seven domestic doubles and the 2013 Champions League. He then spent just under two years with Manchester United.

We can't thank you enough! #DankeBasti#ServusBastipic.twitter.com/ktckHjRr5d

He won 121 caps for Germany and lifted the World Cup in 2014, announcing his international retirement after the Euro 2016 finals.

Schweinsteiger played a half each for Bayern and Chicago Fire in the match, in which Serge Gnabry, Sandro Wagner and Arjen Robben also scored for the hosts.

The Allianz was lit up in red and emblazoned with the number 31, the jersey made famous by Schweinsteiger in his 14 years at the club, to mark the occasion.