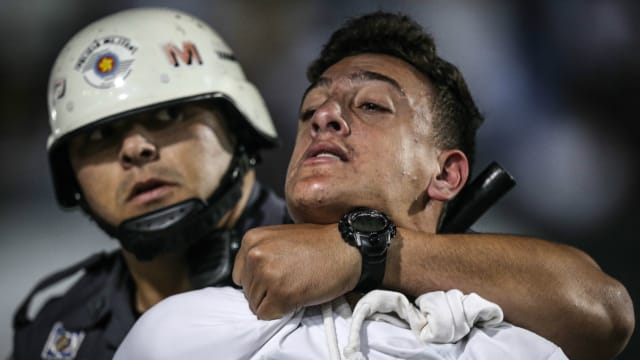 It was a drama-filled evening after CONMEBOL controversially overturned the result of last week's Copa Libertadores first-leg clash as Independiente advanced to the quarter-finals ahead of Santos.

Santos and Independiente played out a goalless draw on August 21 but the latter were awarded a 3-0 victory just hours before Tuesday's return fixture after the Brazilian side fielded an ineligible player.

Carlos Sanchez was at the centre of the controversy due to a red card he was given during his River Plate stint in 2015, with Independiente arguing the Uruguay international should have been suspended for the opening leg.

CONMEBOL ruled Sanchez did not serve the entirety of the ban handed out three years ago.

Describing the decision as "embarrassing" on the day of the second leg, Santos released a statement, which said: "Faced with this instability in the political scenario experienced by the Brazilian clubs in CONMEBOL, there is a pressing need for a union of all Brazilian sports representatives so that our football will not be grossly harmed.

"We will go to the last instances to defend our right to compete in equality, as well as that, we will not fade away in the incessant search for justice damages already caused."

Bizarrely, Sanchez played on Tuesday as Santos and Independiente drew 0-0 in Sao Paulo.

The drama was not over there as the match was suspended due to crowd trouble at Pacaembu Stadium, where fans and police clashed.

Independiente, whose Maximiliano Meza missed a penalty in first-half stoppage time, will face either River or Racing Club in the quarters.

Gremio reached the last eight after edging Estudiantes 5-3 on penalties in Porto Alegre, where the tie finished 3-3 on aggregate following the former's 2-1 victory on Tuesday.

Next up for Gremio are Atletico Tucuman, who prevailed 2-1 on aggregate despite a 1-0 loss at Atletico Nacional.