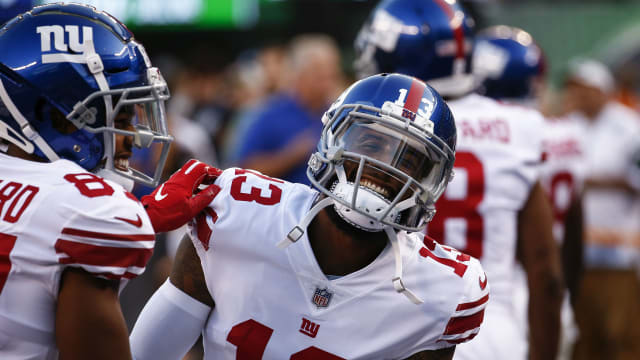 Odell Beckham Jr. is relishing being part of an "amazing" New York Giants offense, his motivation to achieve his goals in the NFL only furthered by his record-breaking five-year contract extension.

Beckham had been due to enter the final year of his rookie contract, signed in 2014, but on Monday agreed to a deal reportedly worth $95million. The contract is said to have $41m fully guaranteed, the highest ever amount for a wide receiver, with $65m in total guarantees.

His $20m average salary over the first three years of his deal makes him the highest-paid receiver in the NFL, with Beckham relieved to see negotiations reach a positive conclusion.

"Honestly, I don't even know how to explain it," Beckham told the Giants' official website. "I don't know if it's a relief, I don't know - it's a combination of everything. You've worked all your life to get to this point and it's finally here.

"I have to thank [owners] Mr. Mara, Steve Tisch, [general manager] Mr. Gettleman, coach [Pat] Shurmur, Eli [Manning], all the guys I played with in the past years. Everybody was really a part of this - my mom, my dad, my family, everybody who was supporting me through this.

"It's just such an amazing feeling, I can't even explain. Most importantly, I have to thank God for being able to put me back together mentally, physically, spiritually. This is just truly amazing; I don't even know the right words to describe.

"It was just a time of patience and waiting and I knew that it would get done, it just was a matter of when and I'm just so happy that it is finally done now."

Ankle injuries derailed Beckham's season as the Giants slumped to a 3-13 record in 2017, but he has high hopes for a rejuvenated attack.

"The offense seems to be amazing," he added. "I feel like we're going to be able to put up a lot of points and do it in a bunch of different ways. We have so many explosive playmakers on this team. Evan Engram, [Sterling] Shep[ard], Cody [Latimer], Saquon [Barkley]. The O-line is playing at a high level, they look very together, and it's time for Eli to bring us home.

"It's time for him to bring us back to what we all dream of doing, which is winning a Super Bowl, so the goals are never going to change, it's just that time to go is now.

"This just kind of secures you and your family, and the ones that are going to come along after you in your family. For me, it's not going to change my goals that I have on the field. If anything, it just increased them even more.

He has played in 47 regular season games.

"I just want to be able to come out and play football the way that I've always played, the way that I love it and have some of my best years that I've ever had in my entire life. This is nothing but more motivation to go even harder and to do even better."

After being drafted 12th overall by the Giants in 2014, Beckham wasted no time in establishing himself as one of the top wideouts in the league. He had at least 1,300 receiving yards in each of his first three seasons before last year's injury-riddled campaign, and has 4,424 yards and 38 touchdowns in his career.