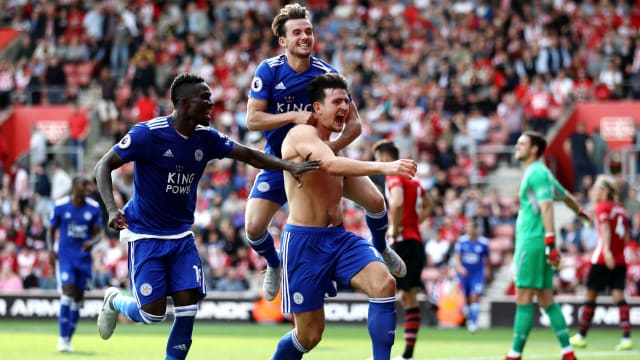 A drab encounter had looked set to end all square after Demarai Gray cancelled out Ryan Bertrand's fine opener on his 150th appearance for the Saints.

But Pierre-Emile Hojbjerg was shown a second yellow card for a clear dive in the penalty area with 13 minutes remaining and Leicester pushed on in search of a winner.

It arrived from the right boot of England man Maguire in stoppage time as he drilled through a crowded area, beating the rooted Alex McCarthy low to his right.

Southampton edged a dull first half, but Kasper Schmeichel kept out the only two shots on target with a pair of comfortable low parries from Mohamed Elyounoussi and Danny Ings.

The hosts stepped up another gear following the restart and, although Schmeichel was alert to dash out and block a low Ings prod, the Leicester goalkeeper was helpless as Bertrand ran onto a loose ball and powered high into the top-left corner from 20 yards.

That goal belatedly prompted Leicester to lift themselves and Gray was clinical just four minutes later, pouncing on Cedric Soares' poor header to turn and finish low inside the area.

Hojbjerg's foolish fall in the box was spotted and punished by the officials to further hand the initiative to Leicester and Maguire took full advantage, marching forward to sink a fine shot into the bottom corner in the 92nd minute.

What does it mean: Saints still struggling

Southampton have played the three sides that finished between seventh and ninth in last season's Premier League so far this term. All were tough fixtures, but a return of one point is especially poor. Even with Ings up front, the Saints looked blunt in attack. Leicester were without Jamie Vardy and likewise suffered, but three points more than make up for a poor performance.

Pat on the back: Maguire makes difference

Maguire was in inspired form at the back, helping Schmeichel to keep Southampton at bay as Leicester offered little before the break, and he then came up with the match-winning moment. The England star is better known for thumping headers than pinpoint drives and he caught everybody, including McCarthy, by surprise with the accuracy of his sublime effort.

Even after scoring, Leicester were hardly convincing. But any chance Southampton had of pushing forward in pursuit of a second goal was all but ended by Hojbjerg. His dive was obvious and the red card capped a dismal display in which he struggled to influence the Saints in a positive sense and swiped wildly at one first-half chance.

- Southampton have lost 24 points from leading positions in the Premier League since the start of 2017-18, the most of any team currently in the top flight.
- Leicester City finally won back-to-back away league matches at Southampton for the first time ever, on their 40th visit there (W5 D14 L21).
- Demarai Gray ended a run of 22 Premier League games without a goal, scoring for the first time in the competition since December 2017 vs Newcastle.