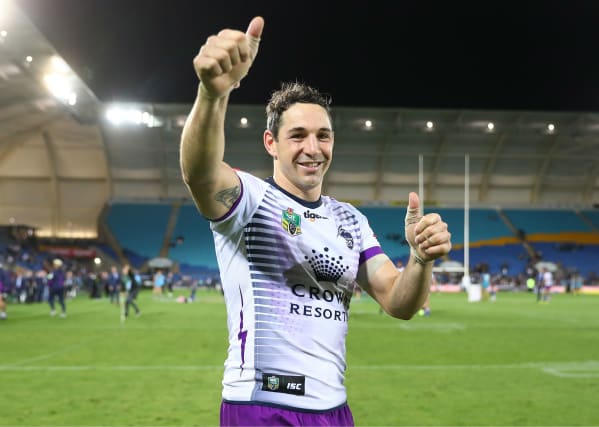 Billy Slater shone in his final NRL game in Queensland as Melbourne Storm all but secured a top-four finish with a 10-8 win over Gold Coast Titans.

Queensland-born Slater, who has confirmed the 2018 season will be his last, ran for a career-high 298 metres to help the Storm clinch their 16th win of the season.

Slater's side had to do it the hard way as they found themselves 8-0 behind at the interval, but tries from Curtis Scott and Cameron Munster after the break earned the NRL leaders the victory.

Man of the Match in his final game in Queensland.

Would you expect anything less from the champ? #ThanksB1llypic.twitter.com/unPcuBBf46

Brisbane Broncos beat the Roosters 22-8 to ensure their progression to the finals as they took full advantage of Dylan Napa's spell in the sin bin.

Napa was punished for a dangerous tackle on Andrew McCullough in the 24th minute, when the score was 8-8, and the Broncos responded with two quick tries through Jamayne Isaako and Kodi Nikorima.

Souths slipped to a third loss in a row despite racing into a 12-0 advantage in the opening half-an-hour against Canberra Raiders.

Michael Oldfield crossed twice either side of half-time and further tries from Sia Soliola and Nick Cotric helped the Raiders to a surprise victory.