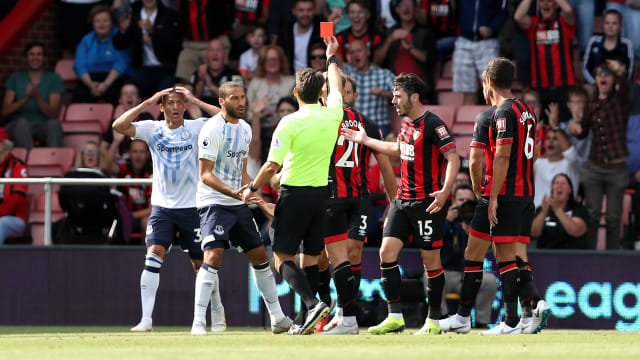 A thrilling 2-2 draw between Bournemouth and Everton ended in concerning fashion as Michael Keane was taken off on a stretcher wearing a neck brace following a sickening aerial collision in stoppage time.

The scorer of Everton's second goal required oxygen following a mid-air clash with team-mate Idrissa Gueye, forcing a lengthy break in play and overshadowing what had been an eventful clash featuring two red cards.

Everton had earlier defied Richarlison's first-half sending off for retaliation against Adam Smith to establish what seemed a match-winning cushion courtesy of Theo Walcott and defender Keane.

But, though Smith himself received his marching orders in between that quickfire salvo, the Cherries snapped into action to net twice in four minutes and ensure both teams remain unbeaten after their opening three Premier League fixtures.

FT: A battling performance from the 10-man Blues. Despite goals from @theowalcott and @michaelkeane04, it ends all square. #EFCawayday