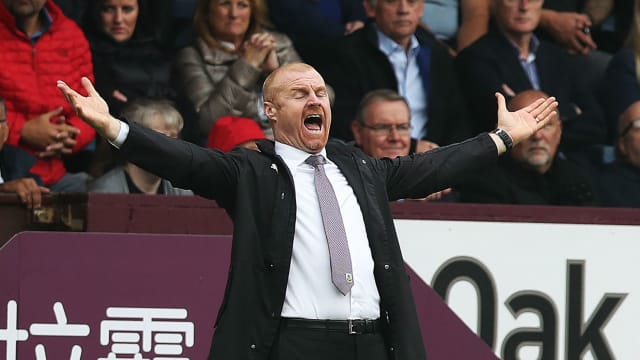 Sean Dyche was left scratching his head at some of the refereeing decisions as Burnley were beaten 3-1 by Olympiacos in their Europa League play-off first leg.

Two goals from Konstantinos Fortounis and an Andreas Bouchalakis header in Piraeus on Thursday left the Clarets with a mountain to climb if they are to keep their European dream alive.

Chris Wood's 33rd-minute penalty offered some consolation, though, the New Zealand international giving Burnley a glimmer of hope with an important away goal.

Burnley manager Dyche was understandably disappointed at seeing his side lose for the second time in six days, but was equally frustrated by the performance of referee Slavko Vincic and the conduct of the Olympiacos bench.

The Greek side felt they should have had two penalties in the first half and surrounded the official at the break to press their case, something Dyche was not impressed with.

"After the incident where they tried for a penalty, which wasn't a penalty, I don't know how many people ran on the pitch and surrounded the referee and the linesman and the officials," the Clarets chief told a media conference, as quoted by the Lancashire Telegraph.

"All I keep getting told is respect the officials with your conduct around the referee.

"The scenes I saw at half-time from all and sundry around the referee on their side. They were waiting for the referee."

And Dyche believes the match changed after the restart, with Ben Gibson penalised for handling inside the penalty area on the hour - the central defender shown a second yellow card.

"You all saw the feel of the game was different in the second half. You're left scratching your head," he added.

"Then miraculously...when one of our players goes to block the ball, it hits his hip then his hand, that's deemed a professional handball and he's sent off!

"I feel for our fans, they've come a long way to see a balanced game and haven't seen that. Hopefully next week will be more even."