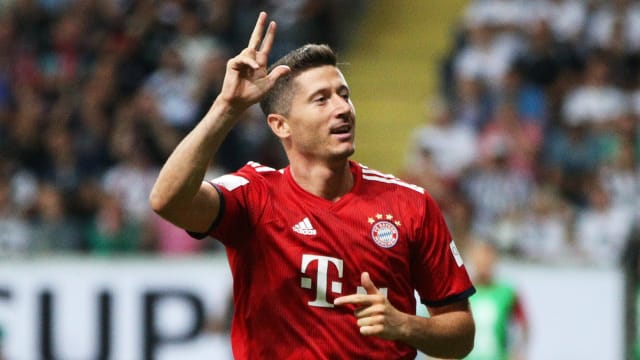 Bayern Munich boss Niko Kovac has defended striker Robert Lewandowski after he hit out at the club's management.

The Poland star accused the Bundesliga champions' hierarchy of failing to stand by him when he was criticised for his form towards the end of last season.

Lewandowski, who has been heavily linked with moves to the likes of Real Madrid and Paris Saint-Germain, admitted the perceived lack of support made him want to leave the club.

The 30-year-old appears likely to stay at the Allianz Arena, though, and has started the season by scoring four times in victories in the DFL-Supercup and DFB-Pokal.

Kovac says he has spoken personally with the forward and is confident he is now happy to stay at the club.

"He expressed things in a factual way," Kovac told a news conference. "He didn't want to go on strike or sit in the stands. He's allowed to reveal his feelings.

"The talks with him were very good. I didn't speak to him as a coach, but as a human being. I understand him, but we have a common goal. We spoke openly and honestly.

"I wasn't here last year. Maybe he didn't get the affection that we all need. But he is here mentally. He has scored four goals so far, four important goals. We can count on him.

"You can see that he is absolutely determined to give everything for this club. I'm happy about that and so are his team mates and the fans."

Jerome Boateng is another to be linked with a move away from the club, with president Uli Hoeness claiming this week there is a "50-50" chance he will join PSG.

Kovac, though, would be delighted to keep him as Bayern aim to fight for a treble of Bundesliga, DFB-Pokal and Champions League triumphs this term.

"I know no more than you," he replied when asked for the latest on Boateng's future. "[Niklas] Sule, [Mats] Hummels, Boateng - a trio like this only exists in one or two other places in Europe.

"Travelling takes energy from players more than the games themselves. We need every player."

Kovac would also be happy for Sebastian Rudy to stay, with the midfielder's proposed move to RB Leizpig said to be looking unlikely.

"A lot can happen. The window is still open," he said. "Sebastian Rudy is a good player. If he stays here, that's good. But there could still be a transfer."