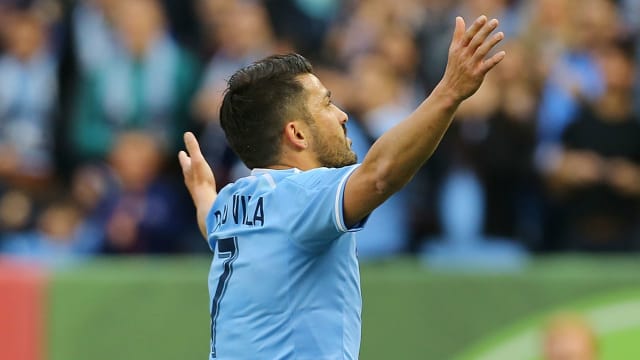 New York City came from behind to draw 1-1 at home to New York Red Bulls in MLS on Wednesday, despite going down to nine men in the Hudson River derby.

David Villa cancelled out Bradley Wright-Phillips' opener at Yankee Stadium, where Eloi Amagat was sent off in the first half of his City debut.

Ebenezer Ofori followed his team-mate in making an early exit in the 72nd minute, but the hosts survived to earn a hard-fought point.

Red Bulls had the better of the early exchanges, Daniel Royer cutting in from the left and firing a warning shot over the bar in the 12th minute. Wright-Phillips then tested City goalkeeper Sean Johnson with a shot across the face of goal seven minutes later.

City's first real chance fell to Villa, who ran onto a ball over the top of the Red Bulls' defence and fired wide of the near post in the 26th minute.

The deadlock was broken 10 minutes later, when Wright-Phillips found space inside the area and stooped to head home Royer's cross.

City's situation worsened with five minutes remaining in the half, when Amagat was deservedly shown a straight red card for a studs-up challenge on Marc Rzatkowski.

Villa came close to equalising for the away team, the former Barcelona star hitting the post with a snap shot in the 45th minute after being found by a quick free-kick and taking advantage of some slack Red Bulls defending to make space inside the area.

He was not to be denied in the 52nd minute though, running onto Jo Inge Berget's knockdown to beat Luis Robles with a low, firm strike.

City were reduced to nine men with 18 minutes to go, Ofori shown a straight red following the intervention of VAR for raking his studs down the calf of Wright-Phillips.

But Red Bulls proved unable to take advantage of their two extra players, and were forced to settle for a share of the spoils after a frenetic conclusion to the contest.