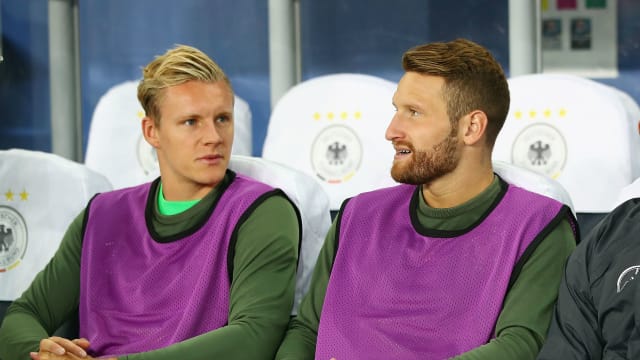 Bernd Leno has all the attributes to thrive under Unai Emery at Arsenal, according to club and country colleague Shkodran Mustafi.

Germany international Leno joined Arsenal from Bayer Leverkusen for £19million in June, but has been unable to displace veteran number one Petr Cech during their opening two Premier League games.

Both those matches, against champions Manchester City and Chelsea, have ended in defeat, with the 36-year-old Cech sometimes appearing ill at ease with head coach Emery's demands that his teams build attacks from the back.

Such an approach would come more naturally to Leno, if Mustafi's appraisal is accurate.

"I know Bernd very well because we played together since the Under-15s German team, so I have known him for a long time," said the centre-back who, like his countryman, was overlooked for a place in Germany's World Cup squad.

"He is a brilliant goalkeeper. He has everything a modern keeper needs: good feet, good hands and he has personality."

Taking also a lot of positive things out of our first season game but the result was definitely not what we were looking for. The next important game is already coming up on Saturday and we need to stand together as a team to be successful  #Team#sm20@arsenalpic.twitter.com/tkIPOsv8Rx

Leno is one of five new arrivals at Emirates Stadium for the beginning of the post-Arsene Wenger era.

Old norms are being thrown out under Emery, with Aaron Ramsey dropped for the 3-2 loss at Chelsea, where star man Mesut Ozil was substituted during the second half.

"Competition is something that brings you to the next level, because if you have no competition and you know you are starting week in, week out, it takes a little bit of the quality [away]," added Mustafi, with Arsenal set to entertain another winless side in West Ham this weekend.

"When you know you have someone standing on your toes, you are going to try and be better and better every week."