Who can take over from Federer, Nadal & Djokovic? Agassi backs Zverev, Kyrgios 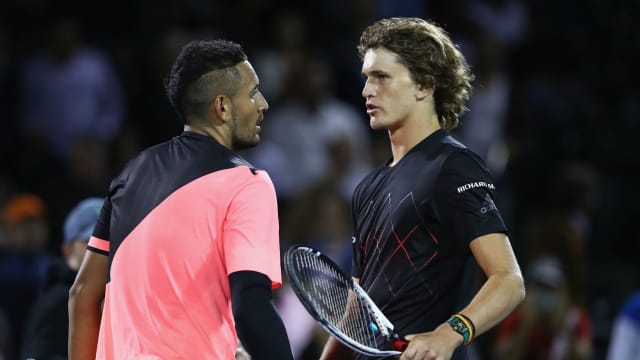 When Roger Federer, Rafael Nadal and Novak Djokovic retire, Andre Agassi believes Alexander Zverev and Nick Kyrgios are primed to step up as the stars of the ATP Tour.

Only 10 of the 59 majors since 2004 have not been won by Federer, Nadal or Djokovic - who are aged 37, 32 and 31 respectively - and six of those have been shared equally between Andy Murray and Stan Wawrinka.

Fans of tennis have concerns about the state the sport will be left in when the trio call it a day, worries that have intensified with Murray and Wawrinka plagued by injury problems.

Agassi, an eight-time grand slam champion, is confident Zverev can help to fill the void, but acknowledged the 21-year-old is not ready to do so yet.

"I think Alex Zverev, or Sacha as they call him, is the guy to watch moving forward, but not right here and right now," Agassi told Tennis365.

"A lot of people fear what will happen to tennis when Federer, Nadal and Djokovic are not playing anymore, but I would look at it in a more positive light. Maybe by the time these great players go, we will be ready for new guys to come in and give the sport a new look.

"Zverev is the one guy I believe can win a lot of big titles if he gets everything right.

"Zverev is working out how to get there at the moment, but I like what I see from him.

"He is an incredible talent, he has a great future and I would be shocked if he didn't win major titles, but he has holes in his game right now and they need to be ironed out."

I'm very happy to announce that this year I'll be back with #teameurope for the @lavercup to try and defend our title. Lets go #teameurope

Agassi also considers controversial Australian Kyrgios a contender for major glory in the future, but feels he has a lot to work on if he is to make the most of his evident ability.

"Kyrgios may be the greatest natural talent of the guys coming through now, but you have to wait and see if he can put it all together when it matters most," said Agassi.

"He is as gifted as you can get on a tennis court, but he needs to focus on what is required to reach the very top because there is no doubt his talent is there.

"Maybe he needs to find the right person to give him some guidance and that would need to be someone he respects, but you can see what is possible with Kyrgios.

"There are so many ways this guy could win a tennis match, but equally there are ways he can lose it that most players have not thought of yet. He needs to focus on what he can do and hopefully the problems he has had with injuries do not affect him."