Kohli and Rahane star as India edge day one 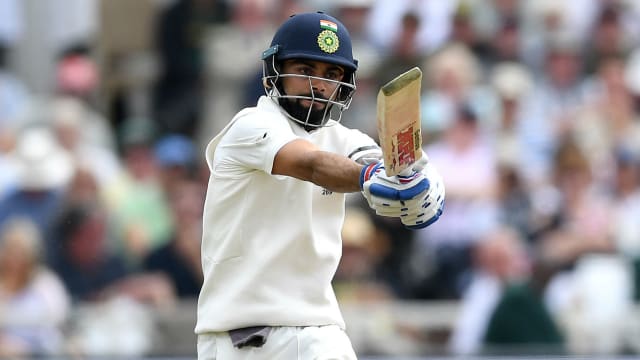 Virat Kohli and Ajinkya Rahane shared what was comfortably India's highest stand of the series before the tourists closed on 307-6 having been asked to bat first on day one of the third Test at Trent Bridge.

The visiting captain fell just three runs shy of a second hundred of this tour, while Rahane - backed by head coach Ravi Shastri in the lead-up to the game - made a classy 81 as the pair enjoyed a 159-run union to put the home side under pressure.

Kohli and Rahane's partnership came at a crucial time, India having lost three quick wickets - all to Chris Woakes - to decline from 60-0 to 82-3 at lunch.

Following a wicket-less middle session, England did remove both dangermen after tea and James Anderson's dismissal of Hardik Pandya (18) with what proved to be the final ball of the day ensured Joe Root's men walked from the field with more of a spring in their step as they look to secure a series-clinching win.

An enthralling first day at Trent Bridge comes to a close with India 307/6. James Anderson dismissed Hardik Pandya with the final ball of the day to take his 100th wicket against India. #ENGvIND

Having been put in, India's openers could have been forgiven for expecting a rough ride against the new ball under cloudy skies, but KL Rahul and the recalled Shikhar Dhawan acquitted themselves admirably.

That stand ended as Dhawan fell for 35 in edging to second slip and Woakes struck again in his next over, following up five away swingers with one that jagged back and trapped Rahul in front for 23.

India lost a review in challenging that call and England did likewise in trying to remove Kohli, who saw Cheteshwar Pujara (14) depart needlessly in the final over of the session, hooking Woakes to deep fine-leg where Adil Rashid took the catch.

Under clearing skies, batting appeared simpler after lunch as Rahane and Kohli scored at a healthy rate - the skipper first to fifty with a single through point, his partner's brought up in greater style as he crunched Woakes through the off side for a boundary.

Shortly after tea, Rahane - on 57 - was put down by Anderson, who could not hold on to a tough one-handed chance at point off Woakes.

There was to be no century for Rahane, however, as Stuart Broad induced an edge and Alastair Cook pulled off a sensational reaction grab to his left after expecting Jonny Bairstow to gobble up the chance.

Nor was there a hundred for Kohli, who remonstrated furiously with himself after driving loosely at Rashid and edging to Ben Stokes - back in the team after being cleared of affray.

If Test debutant Rishabh Pant was feeling nervous he showed little sign, thumping Rashid over his head for six from just his second ball.

Keaton Jennings' poor drop of Pandya off Broad was not heavily punished as Jos Buttler proved a safer pair of hands right at the end to give Anderson his 100th wicket against India.