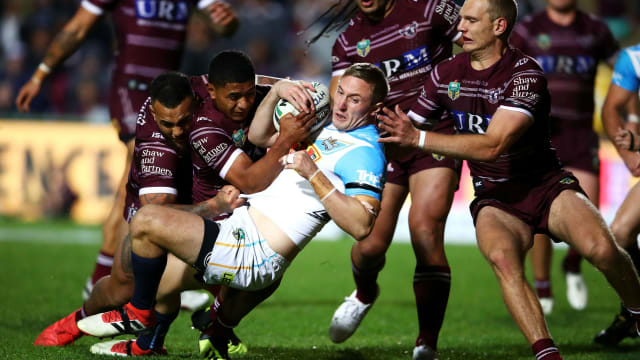 Barrett is reportedly on the brink of leaving Manly, claiming that legal reasons prevent him explaining the situation, but the Sea Eagles initially appeared unaffected on Friday.

Despite falling behind early on, a flurry of tries from brothers Tom and Jake Trbojevic, followed by a Joel Thompson effort, put Manly 22-6 up with just half an hour played.

But the game turned after AJ Brimson scored on the stroke of half-time, with the Titans in inspired form after the restart, crossing another five times in just over 20 minutes.

Brimson's second completed a run of 36 unanswered points and ultimately proved enough to take the game beyond the Sea Eagles, even with Jake Trbojevic grabbing his second try and brother Tom clinching his hat-trick late on.

Elsewhere, the Storm bounced back from consecutive defeats with a 20-4 triumph over Parramatta Eels, but they paid a heavy price.

On an otherwise comfortable evening for Melbourne, captain Smith went down holding his ribs late in the first half and failed in his attempts to play on.

Smith kicked a pair of penalties and converted Will Chambers' early try before bowing out, with Nelson Asofa-Solomona and Curtis Scott adding to the scoreline after the break, prior to a late Eels consolation.