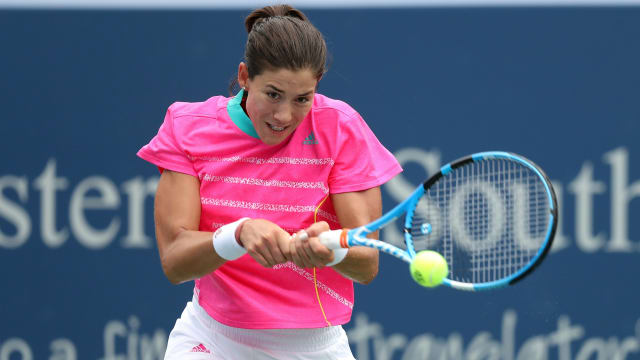 World number one Simona Halep was on track to book her spot in the Cincinnati Masters round of 16 before the rain set in, while defending champion Garbine Muguruza crashed out.

Rogers Cup champion Halep was leading 4-3 and 30-15 in the third and deciding set against Australian qualifier Alja Tomljanovic when rain washed out play on Wednesday.

The Romanian top seed had reeled off four successive games to wrestle the momentum back from Tomljanovic, who lost the second set 6-3 after winning the opener 6-4 midweek.

Halep and Tomljanovic will complete their clash on Thursday, with the winner to face Ashleigh Barty later in the day.

Play has been cancelled for the day due to rain.

Please stay tuned for an updated Thursday order of play.#CincyTennispic.twitter.com/3h6RDghxDi

Muguruza's title defence came to an end at the hands of Lesia Tsurenko in three sets, while Australian Open winner Caroline Wozniacki was forced to retire due to injury.

Sloane Stephens and Angelique Kerber also won through to the next round at the WTA tournament.

The Spaniard and her quest for back-to-back Cincinnati titles was dismissed by Tsurenko, who claimed a hard-fought 2-6 6-2 6-2 victory.

Seventh seed Muguruza - playing for the first time since Wimbledon due to an arm injury - was up a break in the final set but failed to see off Ukraine's Tsurenko.

Tsurenko will next play Ekaterina Makarova after the Russian dismantled Alize Cornet 6-2 6-0.

A left knee injury forced second seed Wozniacki to retire from her match against Kiki Bertens.

Danish star Wozniacki had just lost the opening set 6-4 when she withdrew in the second-round clash, which was delayed by rain for more than three hours.

Wozniacki has been forced to retire due to injury.@KikiBertens advances to @CincyTennis round of 16! pic.twitter.com/S8SyglgwcR

"I'm sorry that she had to retire," Bertens said. "I hope she'll be better soon and ready for New York. From my side, it's a little bit tough to play at night. I'd rather play during the day when it's warm, but I was just trying to play aggressive."

A finalist in Montreal last week, US Open champion Stephens continued her good form with a 6-3 6-2 win over Tatjana Maria.

American third seed Stephens needed just over an hour to see off the qualifier to secure a showdown with fellow seed Elise Mertens.

A rain delay halted Kerber - who lost in the opening round at the Rogers Cup - but the German rallied to claim her 40th win of the season.

"I think that that was really an important match for me, to get my rhythm, feel the ball, play tough and close matches again, especially now after few weeks off," Kerber said.